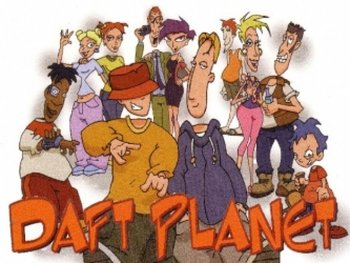 Daft Planet is a Canadian cartoon from CinéGroupe that first aired on Teletoon on September 2nd, 2002 as part of its Detour block (basically, the Canadian version of Adult Swim until the official version arrived in 2012).

The show follows the lives of two teenagers in Maple City. Ched Harley, the son of a taxidermist, and Hudson Stiles, the son of a network executive. Despite their class differences, the two are very close friends.

The show only lasted for thirteen episodes, having production cut short when funding ran out due to cuts to the Canadian Television Fund program (one of the major Canadian Content funding organizations of the time, now succeeded by the Canadian Media Fund).