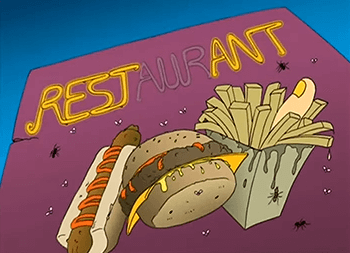 Almost 90% of our food is non-toxic.
"Let me just tell you now, I would never, never have put a spoon of anything in my mouth if I knew this was taking place!"
— Gordon Ramsay, Kitchen Nightmares
Advertisement:

A large number of comedies feature restaurants and other food service venues that would give any self-respecting health inspector a heart attack. Food is sold months or even years after its expiration date, it's often prepared by an uncouth cook who manages to get a great deal of hair and bodily fluid into whatever he's cooking, murky Mystery Meat (which usually contains vermin or something else nobody would ever want to put in their mouth) is used, and certain delicacies may even have a life of their own. In terms of beverages, expect Bad to the Last Drop coffee, Shoddy Knockoff soft drinks, and, if it serves alcohol, A Tankard of Moose Urine beer.

Generally, this trope can come in two distinct flavors:

A Lethal Eatery may employ a Lethal Chef or two, but in some cases the food tastes alright... At least until the unlucky customers discover exactly what was in it.

This is almost always Played for Laughs.