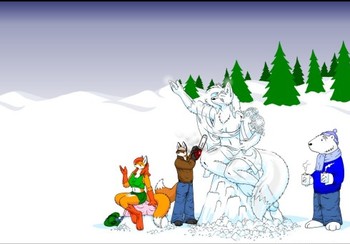 is an unusual paintball-themed Furry Webcomic about an Alaskan airsmith polar bear named Doc and his animal friends (all of them Funny Animals) as they play paintball, deal with ornery customers of Doc's shop, and cause crazy stuff to happen by building machines way more powerful than is necessary. Read it here.

The Whiteboard provides examples of: