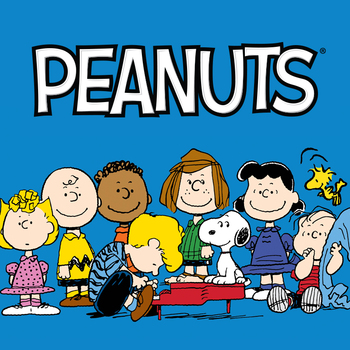 It's Good Ol' Charlie Brown and his friends.note Left to right: Sally Brown, Charlie Brown, Franklin, Schroeder, Peppermint Patty, Snoopy, Lucy Van Pelt, Linus Van Pelt, and Woodstock.
"To take a blank piece of paper and draw characters that people love and worry about is extremely satisfying. It really does not matter what you are called, or where your work is placed, as long as it brings some kind of joy to some person some place."
— Charles M. Schulz
Advertisement:

One of the most popular and influential daily Newspaper Comics of all time, Peanuts, created by Charles M. Schulz, debuted on October 2, 1950. Schulz went on to write and draw the strip for 49 years, 3 months and 1 day.

While it's got a large cast, the stars of the strip are a boy named Charlie Brownnote whom Schulz named for a fellow instructor at the Art School of Minneapolis and his pet beagle Snoopy.

Peanuts had its origins as a successor to Li'l Folks, a weekly feature that Schulz had drawn for his hometown newspaper in the late '40s. It ended its long newspaper run in 2000, with the final weekday strip appearing on January 3 and the final Sunday strip on February 13 of that year... which, as it turned out, was one day after Charles Schulz died in his sleep at the age of 77. Since then, the comic has kept a place in many newspapers by way of reruns.

It launched the franchise of the same name. This includes a series of animated TV specials, feature films and some regular TV series, beginning with the classic Christmas Special A Charlie Brown Christmas, that have been annual mainstays on American network television for more than half-a-century. Today, most of the productions are exclusively available on Apple TV+, which is also producing original series and new specials for online viewing.

In 2011, Boom! Studios began producing a series of Peanuts comic books (as part of the KaBOOM! Comics line), featuring new content as well as old strips. Peanuts comic stories had been previously commissioned for Dell Comics in the late '50s and early '60s.

The complete Peanuts comic strip archive can be viewed at GoComics.com

. Fantagraphics Books began publishing a multi-volume series collecting the strip's complete run in dead-tree format in 2004; the series, which encompasses 26 volumes, was finished in 2016.

You have tropes, Charlie Brown!

Example of:
Shrunk in the Wash