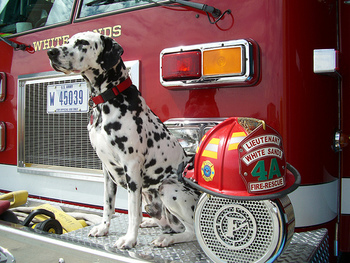 Aside from being the stars of a certain Disney movie, Dalmatians are also recognized as the dog most likely seen with firefighters, often serving no purpose other than being a mascot. This wasn't always the case; in the old days Dalmatians were chosen to help the fire department because the breed works well with horses. Since no fire department has used horse-driven wagons in nearly a century, there's no real reason to use Dalmatians over any other breed, but firefighters and Dalmatians have been associated with each other in our culture for so long it's unlikely this will ever change.

Sometimes, the dog will assist firefighters in their rescue missions. This is something much more common in fiction, though it can happen in Real Life.

Compare Saint-Bernard Rescue and Sled Dogs Through the Snow.

Brief shot of the firehouse Dalmatian in Airplane!. (Was a collie in the original film, Zero Hour!.)

Brief shot of the firehouse Dalmatian in Airplane!. (Was a collie in the original film, Zero Hour!.)