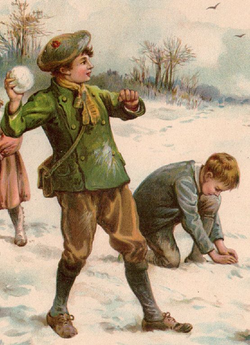 "I've never actually been in a snowball fight. I don't even know the rules. Is there like a point system or is it... to the death?"
— Flint Lockwood, Cloudy with a Chance of Meatballs
Advertisement:

Wintertime, fresh snow on the ground, lots of mischievous kids... and plenty of ammunition literally at their feet. Just pack the snow into snowballs and get throwing.

Common in stories featuring children, where it usually ends up being Serious Business. Also may feature as a lighter moment in military stories. Can be used as a winter-themed version of Dodgeball Is Hell.

Putting ice — or rocks — in snowballs, however, can convert it to actually serious (if not deadly) business.

Frequent in Let There Be Snow and Snowed-In.

Truth in Television, and a staple of snow days.

Jet, Sean, and Sydney have a snowball fight while talking about Christmas.

Jet, Sean, and Sydney have a snowball fight while talking about Christmas.