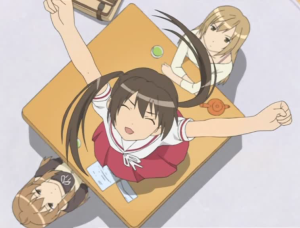 This story is a simple illustration of the three sisters of the Minami household. Please do not expect too much out of it.
Advertisement:

Minami-ke is a seinen manga series by Koharu Sakuraba which began serialization in Weekly Young Magazine in 2004. Take an Onee-sama, a hopelessly Genki Girl, and a Little Miss Snarker, make them sisters, and put them all under one roof. That's Minami-ke. The show is a Slice of Life comedy which blends the High School, Middle School, and Elementary School subgenres by having each of the three sisters attend one of these. The fourth storyline is about interactions of the three and their friends at home.

The series follows the footsteps of Azumanga Daioh, Lucky Star, and other Slice of Life works. Don't expect much realism or drama. Do expect a lot of eccentric characters that play off each other and just a plain lot of fun.

The manga was adapted into an anime by Daume and directed by Masahiko Ohta in 2007. It was followed the next year by a sequel series titled Minami-ke Okawari by a different studio, Asread. It mostly consists of original material not covered in the manga and contains much more Fanservice, which might be the reason that the viewing public generally regards it as far inferior to the first season.

A third season called Minami-ke Okaeri aired in early 2009, returning closer in style to the first season, and being met with good reception in turn. A short bonus episode, Minami-ke Betsubara, was also released in 2009.

A fourth season, Minami-ke Tadaima, this time animated by feel., aired in the Winter 2013 Anime season (simulcast by Funimation), and returns even more to the first season's roots, down to having a similarly-styled opening song and animation. It even brought back the iconic starting spiel that you can see at the top of this very entry. Two OVAs, named Minami-ke Omatasenote it's released before Tadaima and Minami-ke Natsuyasumi, were also released, with the first one being a Halloween Episode and the second one being a Beach Episode.

The show has a character sheet.