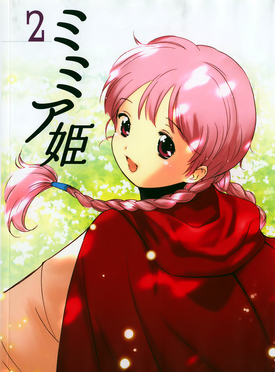 Tiny Mimia-hime, grasp the flame of life. You've had a long journey.
And you shall be called this Star's Beloved Child.
You've nothing to fear now, be born.
Advertisement:

In a place known as The City of Clouds - a place other worlds call Heaven - where the people fly on wings of light, a child is born without wings. As the residents of The City know that they come from people without wings, one without wings has the form of God. This tiny Princess Mimia is a God Child.

Mimia is weak, without the Power that the people with wings of light have. However, her parents love and care for her and tend her tiny flame of life as it grows stronger and stronger. At first, without the Power, she cannot "speak" with anyone, and feels alone. So she cries. But her mother and father and sister love her and soon, through her tears, she learns that she is not alone. She learns to talk and run and swim and read and continues to grow.

While talking with an elder of her people, she is told that she is destined to journey to distant lands. That her journey will take her outside her world, beyond the sky and even further. To cross universes as a God Child.

Thus begins another epic from mangaka Tanaka Yutaka, which ran in Afternoon from 2006 to 2009. Written in a fairy tale style, Mimia-hime is a lusciously-illustrated, poetically written story about Mimia, her birth, her growth and the beginnings of her journey into those distant lands. The religious symbolism is rich, but not overpowering, content to be what it is as nothing more than a background for Mimia's story.

Tropes found in this work (still under heavy construction)