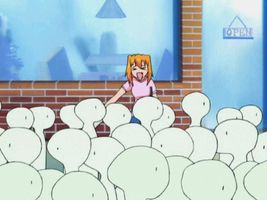 OK, now that's just ridiculous, even for this show.
"When I search a faceless crowd
A swirling mass of gray and black and white
They don't look real to me
In fact, they look so strange"
— The Rolling Stones, "Salt of the Earth"
Advertisement:

Animation is on a very strict timeframe almost all of the time. It's a massive chore trying to get the main characters, their backgrounds, and their actions drawn and colored. One can forgive the animators for skimping on the unnecessary bits... like nine-tenths of the population of the show.

The extras in a scene tend to be ridiculously less detailed than all the other characters, if detailed at all. Expect them to lack certain items like facial features, outlines, or limbs. Occasionally, their faces may be Henohenomoheji.

But who cares? They're just there to keep the world from feeling deserted.

This is an Animation Trope, but tends to be more noticeable in anime. Contrast with Eccentric Townsfolk, where they all get at least one quirk, or Cast of Snowflakes, where even one-shot extras get detailed faces.

The more extreme form of Only Six Faces and Flashy Protagonists, Bland Extras. Should not be confused with The Faceless, nor with Faceless Goons. For a series where the detailed characters are the only people living in that world, see Minimalist Cast.

Can very easily be creepy (especially if depicted side-by-side with fully detailed characters), although savvy animators will take advantage of this depending on the mood of the show.