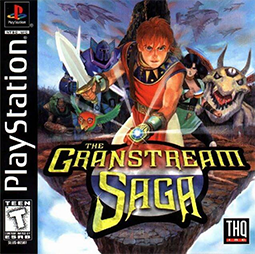 The Granstream Saga (グランストリーム伝記 Guransutorīmu Denki) is a 1997 Action RPG for the PlayStation. The game was developed by a team consisting of staff from the developer Quintet (under the name Shade), the developers of the SoulBlazer Thematic Series, which this game could be considered an oft-overlooked part of.

The Granstream Saga is lauded as one of the first fully polygonal RPGs, as opposed to using polygonal characters with pre-rendered backgrounds, polygonal environments with scaling sprites, or other such combinations. The game features anime-style cutscenes by Production I.G. It is also somewhat unusual in that the characters the player meets in the game are faceless.