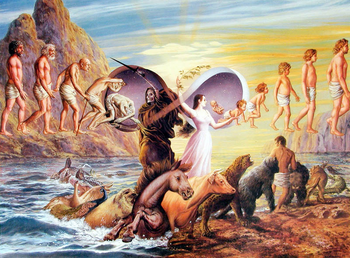 Everything old is new again.
"Each of us plays a role; each time a different role. Maybe the last time I was the interrogator and you were the prisoner. The players change, the story remains the same."
— Leoben to Kara Thrace in Battlestar Galactica, "Flesh and Bone".
Advertisement:

One or more of the main characters is the reincarnation of someone from the past, and they are forced to live with the effects of their previous incarnation's life, loves and choices. A device seen in some Shoujo stories, often allowing for a "destined love that survives death" plot element. Also used for a "duty that survives death" plot as well, and thus a good way to set up a character as The Hero. Sometimes allows for Time Travel to previous incarnations in the form of Visions of Another Self.

Usually, just like an Identical Grandson, a reincarnated person looks exactly like their previous self, unless the contrast is used for some irony — e.g., a couple of lovers being reincarnated as the opposite genders. Roles can change as well for dramatic effect. The Woobie might be reborn as The Hero, a villain finds redemption as a florist, but the bickering Vitriolic Best Buds are still at it!

When it's used in a Western series, the greater religious aspects are often ignored. It's common for the reincarnated character to have some form of Past-Life Memories, though Resurrection Sickness may set in with the flood of new thoughts. May manifest only in Dreaming of Times Gone By. Reincarnation-Identifying Trait is how the audience and/or the characters can tell another person is a reincarnation.

If you're looking for a reincarnation that occurs over the course of a series, see Back from the Dead. If a character explicitly has the power to reincarnate every time they die, it's Born-Again Immortality.

If you're looking for a Flash game about demons recapturing escapees from Hell, go here.

This can be confused with and is often incorrectly interchanged in fiction with the concept of resurrection: A dead person comes back from the dead in the same body (perhaps complete with a Mortal Wound Reveal) and their original spirit (a specialty of Jesus in Christianity, though some believe in both). Reincarnation's formal definition is the return to the land of the living with the same spirit but often in a different form than the same body you left behind (as a man rather than a woman, a flea, a sunflower, or the same gender, but in a different body... whatever.) That's the principle found in Eastern philosophy, such as Buddhism. And even then, in Real Life it gets complicated; in Eastern thought, just because one's "pattern" shows up again does not necessarily mean it's "you." (Buddhist doctrine reject it, while Hinduism traditionally accepts it).

3rd century Chinese strategist Kongming dies and suddenly finds himself in modern day Japan on Halloween, leading him to mistake it for hell at first.

3rd century Chinese strategist Kongming dies and suddenly finds himself in modern day Japan on Halloween, leading him to mistake it for hell at first.