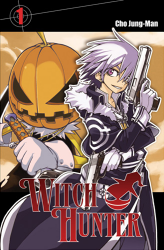 It's that kind of manhwa.
Witches declare war against people, decimating two thirds of the civilized world. They summon monsters called Supporters and devastate human residences... but why?
The surviving humans gather those with extraordinary powers into an organization dubbed 'Witch Hunter'. Aided by a Jack O Lantern-esque supporter, Tasha Godspell is one of the strongest Witch Hunters around. True to his moniker, The Magic Marksman, Tasha crushes Witches with devastating accuracy — yet he cannot come to hate them...
Advertisement:

An ongoing manhwa written and illustrated by Jung-Man Cho. Witch Hunter is equal parts comedy, drama, action, and intrigue, fueled by Rule of Cool and a truly lovable Power Trio. Despite its epic scope, Witch Hunter favours character dynamics over politics; Tasha and his comrades (and enemies, and in-betweens) spend more screentime interacting than playing Mr. Exposition. Also: Every man is badass, every woman a Hot Librarian or Cute Witch, and awesome binds the universe together. You'll find little Angst here — unlike that other Asian graphic novel about hunting witches, Jung-Man Cho's title never takes itself too seriously.

The series has been licensed by Seven Seas Entertainment, which has released it with the title of Witch Buster in Ominbus format starting June 2012. And in an unusual move, the translated pages are also being released on a MWF schedule over at Zoom Comics

Here's the character page. If you're looking for a trope about a type of character, it's The Witch Hunter.

Not to be confused with Witch Hunter Robin.