A Love to Dismember 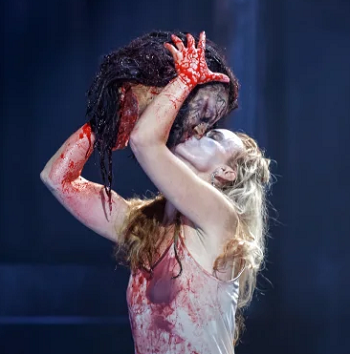 That is not how you give...never mind, too late now.
"That right hand of yours... I've got it displayed in my bedroom. I go to sleep with it every night. Doesn't that make you hard?"
— Barus, CLOVER
Advertisement:

A character has a... physical relationship with a severed body part of some sort, taken off some person. This is about the most pleasant way of putting things — for obvious reasons, this trope induces some very heavy Squick, and is usually a sign that the character in question is severely disturbed.

See also I Love the Dead, Mummies at the Dinner Table and some examples of Body in a Breadbox. Sometimes combined with Out with a Bang for added Squick. Often overlaps with but isn't quite the same as Creepy Souvenir. Alas, Poor Yorick is the non-sexual version of this.