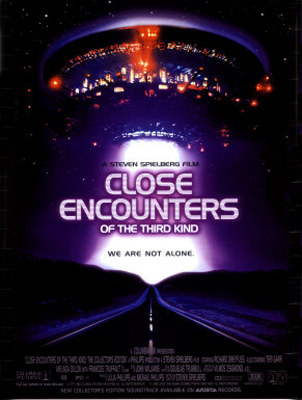 It looks something like this.
"This spaceship takes off really slowly. It's a little awkward."
— Paul, Paul
Advertisement:

A highlight of many movies, a point where the score, pacing and cinematography will often gang up and try to underscore the drama of the moment, is the Dramatic Alien VTOL where we see an alien spaceship, like a chariot of the gods ascending or descending from heaven, make a Vertical Take-Off or Landing. It will fill the screen as the music swells and slowly take time to hover so that the camera can take Reaction Shots of amazed onlookers. Sometimes there is some kind of added environmental effect like water shaking, the wind blowing or radio signal static. You might not be able to make out the shape properly due to all the bright lights.

The sense of awe is often added to by the craft being of a very un-plane-like design. It will be unfeasibly massive or perhaps a Spheroid Dropship. It will also possibly be the most expensive visual effects shot in the movie.

See also Take Me to Your Leader.