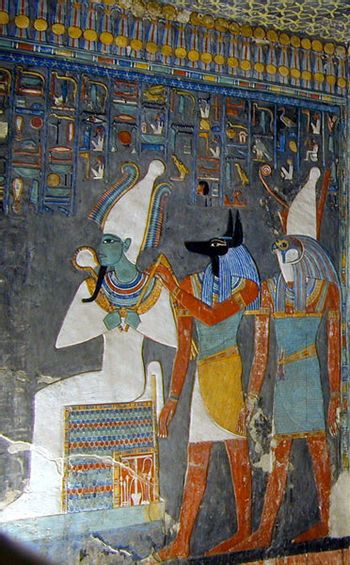 Osiris, followed by his two sons, Anubis and Horus. The family resemblance is a bit hard to spot.
Advertisement:

The Ancient Egyptians had quite a lot of deities, many of whom have "turned up" in fiction, especially as Ancient Aliens.

As with many other mythologies around the world there are different versions of many Egyptian myths, which results in a highly confusing mythology. Ancient Egyptian History is reflected in the history of Egypt's gods. Upper Egypt conquered Lower Egypt.note That is, the kingdom in the South, which had a higher elevation and was upstream on the Nile, conquered the one in the North. When the formerly-two kingdoms started to merge the pantheons into one, things became a mess.note Though for additional reading on this topic, see Classical Mythology - the mashup between Greek and Roman mythology is a great big bundle of fun! And migraines... Some deities were merged, renamed, or outright changed to try to keep the newly united kingdom's religion straight.

And of course, Egyptian Mythology contains the Older Than Dirt examples of many a trope. See the character sheet for a listing of the major gods and associated tropes.

Works based on/borrowing from Egyptian myths: