Literature / The Secrets of the Immortal Nicholas Flamel 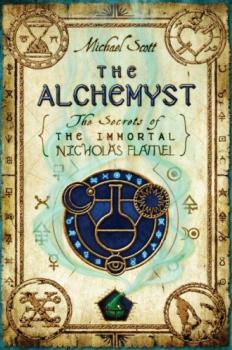 The Secrets of the Immortal Nicholas Flamel is a series of six books by Irish author Michael Scott. It's a contemporary fantasy that is set in modern-day San Francisco at the beginning of the series, but also features other locations throughout the world, as well as various Shadowrealms.

The Alchemyst, the first book in the series, begins in San Francisco when twins Josh and Sophie Newman discover that the owner of the bookstore where Josh works is the immortal French alchemist, Nicholas Flamel. Flamel and his wife, Perenelle, are the guardians of the Book of Abraham, a collection of the most powerful spells in the world, which they have protected for centuries. When Dr John Dee discovers the Flamels' whereabouts, he attacks and snatches the book to help his masters, the Dark Elders, cause The End of the World as We Know It. Josh and Sophie intervene to help Flamel, but now they too are being hunted by Dee and creatures that predate humanity.

A film version has been announced, with Lorenzo di Bonaventura having purchased the rights. Michael Scott and Barry Krost will be the executive producers, but the scriptwriter has not yet been chosen.

Not to be confused with a certain other fantasy book with Nicholas Flamel.

Now with a character page that needs some love.