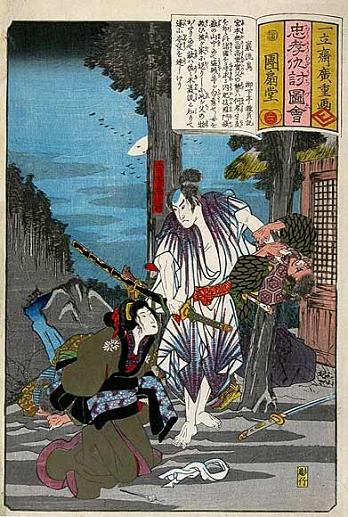 (1584? - June 13, 1645) was probably the most famous Japanese swordsman in history, particularly outside Japan.

Musashi was born Shinmen Bennosuke, the son of a low-ranking samurai. He later adopted the personal names Takezo and Musashi (both alternate renderings of the same kanji), and the surname Miyamoto after his home village. He fought and won his first duel at the age of 13, and by the age of 16 he left his village to wander Japan and develop his fighting skills. After being on the losing side of the Battle of Sekigahara, he eventually made his way to Kyoto, where he began a series of duels with that city's Yoshioka school.

Musashi was reportedly victorious in at least 60 duels during his lifetime, and by some accounts went undefeated. In one duel, Musashi is said to have been ambushed by most of the Yoshioka school's students at once, and defeated them all. Another duel prompted him to develop a Dual Wielding sword style, known as Niten Ichi-ryu ("Two Heavens As One" style), arguably developed from the preexisting Enemi-ryu ("Circling Bright-style"). However, his most famous duel was the one on Ganryū Island with Sasaki Kojiro, whom Musashi killed with a single blow with a bokken (wooden sword) that he carved from an oar on the boat ride to the island where the duel took place (the day of which he overslept and arrived over an hour late).note  There is considerable debate about the details of this duel. Some scholars even dispute that it ever occurred at all, and think that Musashi simply murdered Kojiro for political reasons.

After his duel with Sasaki Kojiro, Musashi retired from dueling and for a time became a strategist for hire. After several more years of wandering, he was given a ministerial position and became a Warrior Poet, as well as an accomplished calligrapher and painter. It was also during this period that he wrote his famous Book of Five Rings. After his death in 1645, he was often considered a Kensei ("sword-saint").

Musashi is well known for his strategic brilliance. One of his most famous strategies (which could even be considered his trademark) was his tendency to show up rather late to scheduled duels in order to upset his opponents, resulting in them not being able to fight at their best. In his final duel with Kojiro, it is speculated by some people that Musashi won the duel before he showed up. By timing his arrival so that he was not only late (infuriating Kojiro and taking the edge off his skill) but also so that upon finishing his duel he would leave as the tide was going out, he made a swift escape from Kojiro's followers and supporters who might have chased after him to avenge Kojiro's defeat.

Contrary to popular belief, Musashi did not die in a great battle. He died peacefully of thoracic cancer at his home at the age of 61 - a good age considering the times.

Interestingly, some accounts describe him as a rather unkempt man (these claimed he didn't bathe often due to not wanting to be vulnerable) whose looks didn't age well, and the classic depiction of him with nearly blue hair might be a reference to hair dye. However, considering how hard it would be to maintain a position as a samurainote Historical accounts seem to show he was never a samurai, though he served many masters trying to be one. and never look presentable means that this is probably a myth.

Compare Yagyu Jubei. Do not confuse with that guy from Nintendo.

References to Musashi appear in the following works: