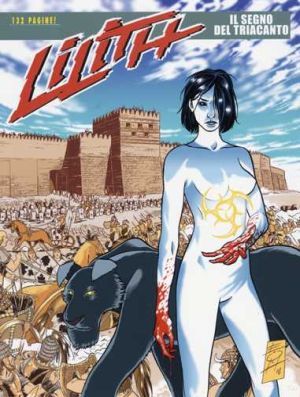 In the distant future, humanity is all but extinct, driven from the surface of the Earth to underground shelters by mysterious aliens called Triacanto. There is no hope of retaking the surface of the Earth. But humanity won't go quietly into that good night. Using time travel technology, they are able to send one special agent — the titular Lilith — backward in history to locate the enemy's unknowing human agents. Lilith will then kill them before they can spread their strange infection to others. This will avert the war and humanity's defeat... and also destroy the reality from whence Lilith came.
Advertisement:

But all may not be as it seems. There are things Lilith doesn't know about why the Spiromorphs attacked, and, as she wades through the blood and turmoil that the worst of human history has to offer, she finds herself questioning whether humanity deserves to be saved. And then there's the little matter of collateral damage to the original timeline...

Penned by Italian author Luca Enoch, the series was published from 2008 to 2017.