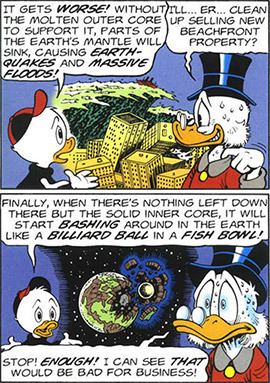 Huey reveals the core problems with the crisis.
"Darkseid goes all out. A lot of villains tell everyone about their plan, but Darkseid filmed an elaborate dramatization of it. Look at those special effects. He didn't just have a computer-rendered picture of what his battle station will look like, he got actors to run around on an airfield while planes were getting vaporized."
— Seanbaby
Advertisement:

Sometimes, it's enough to just say "The World Is In Danger!" and hope the hero (and the audience) may understand the urgency and risk and answer The Call. Sometimes, though, a little more is in order. Storyboarding the Apocalypse is a disturbingly detailed narrated account of the impending Götterdämmerung and rise of the ultimate evil, accompanied by a montage to give plenty of Nightmare Fuel-inducing visions of the end to all parties involved.

Storyboarding the Apocalypse is used on a few different occasions:

Occasionally this is given as a warning by less direct conventional methods; Cassandra Truth can deliver it, or via Psychic Dreams for Everyone, or Time Travel in the hope of driving the point home to the hero and the audience.

Especially detail-oriented villains will have prepared dioramas, movies, a Spreading Disaster Map Graphic, and even commission an Earth-Shattering Poster or two to help hammer it in. Or they might just beam it into the hero's skull with a laser.

Compare Just Between You and Me, Villain World, and Bad Future, which can be the Storyboarded Apocalypse given form. See also Unspoken Plan Guarantee. Contrast Apocalypse Wow, which is also a narrative depiction of the apocalypse, only used for very different dramatic goals. See It's a Wonderful Failure for video games storyboarding the apocalypse when you fail.

Knuckles gives us a short summary of how Metal Sonic is capable of destroying not just The Land Of The Sky, but also the entirety of Planet Freedom.

Knuckles gives us a short summary of how Metal Sonic is capable of destroying not just The Land Of The Sky, but also the entirety of Planet Freedom.