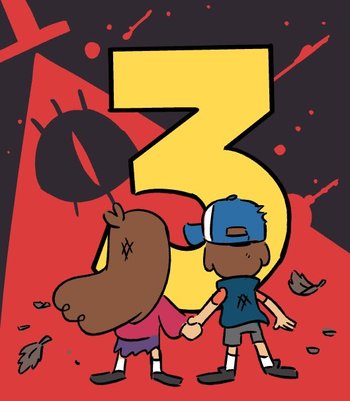 Jrrgebh Judylwb Idoovnote Goodbye Gravity Falls
"Bill wants us to be afraid. He wants us to hide. Those are our friends, and if we don't do something, it'll be our entire universe! So I say we band together and take the fight to him! We are cancelling the Weirdpocalypse!"
— Dipper note in the trailer.

Aired as a one-hour special, with the second half called "Weirdmageddon Part 4: Somewhere in The Woods" in reruns

Continuing from where we left off, the Mystery Shack team is reunited and we see that Stanley has been sheltering the survivors of Weirdmageddon; Old Man McGucket, Pacifica, Candy and Grenda amongst others are included, but also the many monsters and creatures of Gravity Falls who were affected by the cataclysm. It turns out that the Unicorn spell has been protecting the Shack from Bill's influence, with Stanley appointing himself the leader and planning to hide and outlast the Oddpocalypse.

Upon witnessing a news report showing Bill's throne of petrified humans, Dipper and Mabel convince the survivors to fight back; Dipper explains that Ford knows a way to defeat Bill, so the first stage is to rescue him. McGucket comes up with a plan, but everyone needs to help... but Stanley, still resentful over his brother, excludes himself.

In the penthouse suite of the Fearamid, Bill restores Ford and explains his predicament of the barrier confining Weirdmageddon to Gravity Falls. Ford explains that the phenomenon is "Gravity Falls' Natural Law of Weirdness Magnetism", which can be undone by a simple equation. Of course, Ford isn't going to give it to Bill willingly, and Bill can't invade Ford's mind unless they shake hands and is let in. So Bill has to come up with another way in...

The final outcome of McGucket's plan? Converting the Mystery Shack into a Humongous Mecha to storm Bill's castle head-on and rescue Ford. Bill dispatches his henchmaniacs to take down the Shacktron, but thanks to the Shack's Weirdmageddon-proof forcefield and the combined efforts of the survivors, they are fought off. Bill, reasoning that maybe Ford will loosen up if his family is threatened, takes on the Shacktron himself. Fortunately he doesn't do much better and is severely thrown off when the Shacktron rips his eye out. With Bill distracted, the rescue team of Dipper, Mabel, Wendy, Soos, Stan, Pacifica, Sheriff Blubs and McGucket is launched into the Fearamid, equipping themselves with a size-altering flashlight and the memory-erasing gun.

Ford is rescued along with the townsfolk, as well as Gideon, who had been imprisoned by Bill and forced to dance cutely for all eternity. Family and friends are reunited, but time is running out; Bill has regenerated his eye and is realizing that the Shacktron's anti-Bill-field doesn't cover its limbs. Ford reveals the way to defeat Bill, using spray paint to sketch on the floor a familiar symbol; the zodiac wheel seen at the beginning of every episode! Finally, its true purpose is revealed; it is part of a prophecy that can defeat Bill and undo Weirdmageddon, with each symbol representing an individual in the room. When combined and holding hands, they form a human energy circuit.

Some symbols are obvious; Dipper is the Pine Tree, Mabel is the Shooting Star, Soos is the Question Mark and Ford is the Six-Fingered Hand. Some are slightly less so; Pacifica is the Llama (wearing Mabel's llama sweater), Robbie is the Bleeding Heart (the same sigil is on his hoodie) and Gideon is the One-Eyed Star (the Tent of Telepathy's symbol). Some are metaphorical; Wendy is the Ice Bag (for staying cool in the face of danger) and McGucket is the Glasses (for being scholarly). The only symbol left is the Mystery Shack's crescent symbol... but Stan is still bitterly excluding himself, unwilling to buy into his brother's mystical hoodoo.

Stan, after some pressuring from the others, is ready to join the circuit, but under the condition that Ford must thank him for rescuing him from the dimensional portal, which Ford has not done yet. Ford does so and Stan finally joins hands... only for Ford to snarkily comment over his brother's grammar. This turns out to be the last straw for Stan and a sibling fight ensues at the worst possible time; Bill has destroyed the Shacktron, with all the people who could possibly stop him gathered in one room!

Bill is beside himself with glee that his ultimate triumph is at the hands of a sibling conflict. The Pines family is swiftly captured and the remaining zodiac components are turned into tapestries, with their faces frozen in screaming horror. Bill is ready to torture Dipper and Mabel to get the information out of Ford, but Mabel uses Ford's spray paint on Bill's freshly-regenerated eye to stall him and Dipper uses his size-altering flashlight to escape from their cage. Bill, transforming himself into a horrifying three-tiered spider-limbed monstrosity, gives chase, leaving the Pines brothers trapped but giving them time to discuss their options.

The brothers feel guilty and despondent, as their actions have doomed their family and soon the universe; Stan, for not being able to let go of his bitterness for his brother when he wouldn't thank him, and Ford, for falling for Bill's trickery in the first place and his grudge with his brother. Ford decides to play the only card they have left by willingly giving himself up to Bill, just for the slim chance that he'd spare Dipper and Mabel. Adding to Ford's predicament is the fact that if it weren't for the plate implanted in his skull, he could just be zapped with the memory-erasing gun and Bill would be obliterated. Since he could be affected by the memory gun, Stan asks Ford if Bill could enter his mind instead, as there's nothing of value in there... but unfortunately, as Ford puts it, there's nothing of value to Bill either. The brothers know that Bill can't be trusted, but what other choice do they have?

Dipper and Mabel are chased throughout the Fearamid, but their efforts prove futile as a very ticked-off Bill catches up to them, yelling that he'll dismantle their molecules. The twins are caught, but not before witnessing the henchmaniacs capture the other Weirdmageddon survivors. All seems lost as Bill returns to the Pines brothers, saying that he's going to kill one of the kids just for the heck of it. Right before one of the kids is turned into a corpse (or worse...) Ford proclaims his surrender, but under the condition that his family goes free. Bill, victorious, enters Ford's mind and once again becomes a dream being, leaving behind his physical form which turns to stone.

Within Ford's mind is a perfectly calm, white void, with only a single door. Bill opens the door, expecting to see the equation that'll unleash Weirdmageddon upon the universe... and instead sees Stanley, sitting calmly in the living room of the Mystery Shack! It turns out that Stan can do a pretty good impression of his brother, and if they switch clothes no-one can tell the difference. Back in the physical realm, Ford readies the memory gun, and aims it at his brother...

Bill hastily tries to call off the deal, but is too late, as the dream version of the Mystery Shack swiftly bursts into blue flame and starts to fade away into nothingness. Bill, panicking, stammers to Stan that his mind is being deleted, but Stan shrugs it off as he wasn't using it much anyway. Nothing can stop it now, as Bill is trapped in Stan's collapsing dreamscape and his powers have become useless. Bill, fearing for his life, desperately begs for Stan to do something, offering him anything; money, fame, riches, infinite power, his own galaxy, but Stan doesn't budge. As Stan puts it, Bill made one mistake: messing with his family. Bill's form destabilizes into glitchy death throes, only able to stammer one more cryptic command, before Stan punches him in the eye and shatters him into oblivion. Stan embraces a family picture of him and the twins, happy that he was good for something after all, as the blue flames consume him.

With Bill Cipher erased, Weirdmageddon is undone; the henchmaniacs and the Fearamid are sucked back into the nightmare realm and the tear in the sky closes up, restoring Gravity Falls back to it's regular state of near-normalcy and the petrified remains of Bill's physical form is the only remnant left of his reign, and peace in Gravity Falls was restored. For the Pines family however, the universe is saved at a terrible cost as Stan's mind has been deleted and he has no memory of his family or the times he had with them. Ford declares his brother their hero for saving him and the world, as he embraces again for the first time in years. Mabel desperately tries to get Stan to remember by showing him her vacation scrapbook, but nothing is registering... that is, until Waddles leaps onto his lap and Stan calls him by name involuntarily. As Mabel continues to show Stan her vacation photos, Stan's memories slowly begin to return.

Normal life in Gravity Falls returns, only now the monsters and oddities of the town are integrated into the daily lives of the citizens. Mayor Tyler announces a "Never Mind All That" act to gloss over the horror of the last few days so no other visitors will know what happened, the Northwest family lost their fortune to the weirdness bonds and have been demoted to upper-middle class status upon selling their manor, McGucket has regained his sanity and made a fortune patenting his inventions and Gideon is going to attempt to have a normal childhood (with mixed results, but hey, he's trying).

As for the Pines family, the town throws a massive 13th birthday party for the younger twins and Stan's memory is fully recovered. During the party, Ford and Stan finally reconcile and plan to travel the world together in search of oddities and adventure, so Soos is promoted to become the Mystery Shack's new manager. On the day the twins are about to leave, Wendy and Dipper exchange their hats to remember each other and Wendy gives him a note to read the next time he misses Gravity Falls. As the twins were about to leave, they also first had to take Waddles with them after Ford and Stan "persuade" the bus driver with their weapons. The twins say goodbye to Stan, saying they will miss and wave goodbye to everyone until they were out of site. As the twins ride the bus back to their home in Piedmont, Dipper concludes the final moments in narration:

If you've ever taken a road trip through the pacific northwest, you've probably seen a bumper sticker for a place called "Gravity Falls". It's not on any maps, and most people have never heard of it, some people think it's a myth. But if you're curious, don't wait. Take a trip. Find it. It's out there somewhere in the woods. Waiting.

Dipper then opens Wendy's note; it reads "See you next summer", with the Stan twins' and all of their new friends' signatures around it. Dipper smiles as the bus leaves Gravity Falls.

After the credits roll, we see a glimpse of Bill Cipher's petrified form in a real-life forest...

"If you’ve ever taken a road trip through the Pacific Northwest, you’ve probably seen a bumper sticker for a place called Gravity Falls. It’s not on any maps and most people have never heard of it. Some people think it’s a myth. But if you’re curious, don't wait. Take a trip. Find it. It’s out there, somewhere in the woods… waiting."