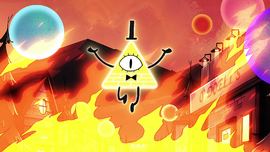 "This party never stops! Time is dead and meaning has no meaning! Existence is upside down and I reign supreme! Welcome one and all to WEIRDMAGEDDON!"
— Bill Cipher

Bill Cipher has succeeded in connecting Earth's dimension to the nightmare realm he comes from! Taking physical form, Bill summons his fellow demons into Gravity Falls. Mabel is sealed into a mysterious bubble between the Hanging Cliffs. Eyeballs with batwings fly around turning people to stone. Waves of weirdness transform people and bring inanimate objects to life. During the chaos, the Gravity Falls prison is damaged, allowing Lil' Gideon and his gang to escape.

Dipper realizes that Mabel was right next to where the Rift broke open and panics. Ford stops his nephew from running off, assuring him that they will save Mabel, but first need to stop Bill. Going to where Bill and his henchmaniacs have gathered, Ford prepares to destroy the triangle with a BFG. Unfortunately a weirdness-created monster throws off his aim, drawing Bill's attention. Knowing he's caught, Ford tries to tell Dipper the only other way to defeat Bill, but is captured before he can divulge. Bill turns Ford into a statue to use as a backscratcher, provoking Dipper to come out of hiding. Dipper tries to look up Bill's weakness in the Journals, but cannot find anything useful. Bill burns the Journals into ashes, taunting Dipper that there is no room for heroes in his world. Dipper is forced to flee, and Bill creates a floating pyramid from which to rule over the town in.

Three days pass. Time Baby and the Time Police attempt to fight Bill, but are wiped out. Dipper eventually reunites with Wendy, who has survived thanks to the survivalist training her father put her through. Wendy is confident that Dipper will find a way to stop Bill, as he did before, but Dipper admits that the only reason he was able win those times was with Mabel's help. Wendy concludes that the first thing they need to do is find Mabel, and Dipper spots the pink bubble Bill placed his twin in.

The pair head to Bud Gleeful's car lot for a ride, but are confronted by Lil' Gideon's gang, who have become Bill's enforcers. Gideon shows the key to Mabel's bubble, gloating that soon Mabel will love him. Wendy manages to steal not just the key but a car for her and Dipper to escape in, instigating a chase. Eventually, they crash, but our found by Soos. Unfortunately, Gideon's gang has found them as well. Gideon repeats his belief that Mabel will be his, but Dipper tells him that it doesn't work like that; Even if Gideon likes Mabel, Mabel won't return the feeling because of how evil Gideon is. Recalling his own failed crush on Wendy, Dipper explains that to win someone's love, you have to be someone worth loving. Realizing how uncomfortable Mabel was with the forced nature of their previous relationship, Gideon allows the Mystery Shack crew to leave so he and his gang can rebel against Bill. Dipper, Wendy, and Soos soon make it to the bubble. Undoing the lock with the key, the three enter, ready to take on whatever trap Bill has set.

Bill Cipher horribly disfigures Preston Northwest's face, but he very much deserved it.

Example of:
Kick the Son of a Bitch

Bill Cipher horribly disfigures Preston Northwest's face, but he very much deserved it.