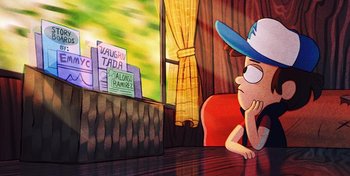 Stan takes the Twins, Candy, Grenda, and Soos on a road trip to sabotage other tourist traps in Oregon. While this is happening, Stan gives Dipper some advice when it comes to girls, which inadvertently catches the attention of Candy, who begins to develop a crush on Dipper, but things come to a head when the group discovers a spider woman at one of the tourist traps and takes Stan hostage.