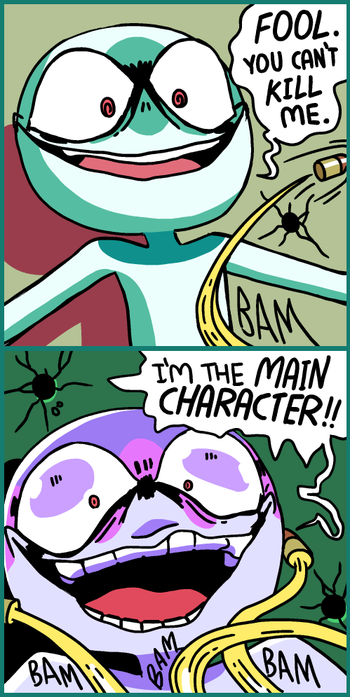 Jeff: For any villains we may meet, we haven't any fears.
Orville: Paramount will protect us, 'cause we're signed for five more years.
— Road to Morocco
Advertisement:

Lucky Bob! He's The Protagonist of a story, The Hero whose predestined role is to oppose — maybe even defeat — the villain. He's essential to the plot, which means it is assumed he will progress through the story until at least the final confrontation.

But Bob will need to have some challenges to reach this encounter with destiny, so the author has to throw dangers in his way. Tension with these challenges are in conflict with the Foregone Conclusion that he will survive, a good author can keep it from being obvious that the orc he meets on page 56 can't possibly stop Bob — not if he's going to meet Fing the Fuming on page 237. But in less skilled hands, Bob's invincibility up to page 236 becomes obvious as every mook he shoots go down in one hit while they either constantly miss him or he is able to shrug off identical strikes. He doesn't have talent or luck; he has a suit of divine armor which miraculously protects him from all lasting harm (until the plot calls for it). Even psychological trauma can be held at bay by Bob's Plot Armor.

Sometimes referred to as "Script Immunity" or a "Character Shield", Plot Armor is when a main character's life and health are safeguarded by the fact that he's the one person who can't be removed from the story. Therefore, whenever Bob is in a situation where he could be killed (or at the least very seriously injured), he comes out unharmed with no logical, In-Universe explanation.note A typical explanation is that Bob survived through sheer luck on the basis of the Anthropic Principle. If only one person is going to survive the story, that person has to be Bob for there to be a story.

Bear in mind that having Plot Armor is not the same as being Nigh-Invulnerable. When Superman takes a bullet to the eye and survives, that's his superhuman nature — there's an explanation, albeit a fantastic one, for how he comes out unharmed. When Indiana Jones survives the same thing, that's Plot Armor — the only explanation for his survival is that it's only halfway through the movie and you know he can't die yet. (Bonus points if he isn't even blinded.)

The downside to all this, of course, is that when it is Bob's time to die, nothing can save him. And his inability to prevent his own death may seem just as illogical as his ability to avoid it was forty pages ago, but alas, the plot gods giveth and the plot gods taketh away...

Typically absent in episodes involving an Expendable Alternate Universe, Time Travel, or any other guaranteed-Reset Button situation. It is suspended when the Hero Killer is present and it is the main reason the Imperial Stormtrooper Marksmanship Academy is still in business (along with a handful of other tropes).

Sub Tropes of this include:

Compare Contractual Immortality (a meta trope where a character cannot truly be dead since his or her actor hasn't left the show) and Rule of Empathy (which may give Plot Armor to sympathetic non-protagonist characters, including villains).

For examples where important characters are just magnitudes stronger than the poor slobs who can't take even one hit, see Almost Lethal Weapons.

For a variation of this trope present in video-games, where a character is invulnerable during gameplay for plot reasons, see You Call That a Wound?.

Contrasts with Anyone Can Die, Characters Dropping Like Flies, Plotline Death, Red Shirt (which is someone wearing a plot target), and Decoy Protagonist (the first focus character does not have Plot Armor, to subvert the audience's expectations)

Panik attempts to kill Yami after the latter beats him in a card game. Too bad you can't kill main characters in this show.

Panik attempts to kill Yami after the latter beats him in a card game. Too bad you can't kill main characters in this show.