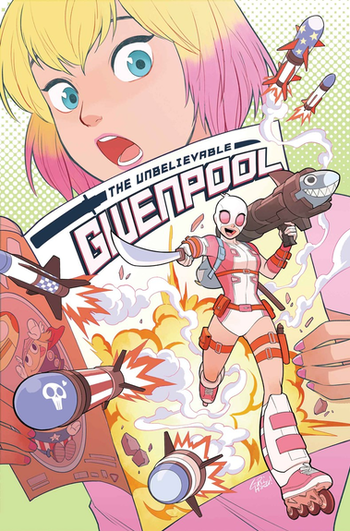 "A while ago I left the real world. I successfully traveled to the very weird space between realities, and emerged here. The comic book land of super heroes! And it was fun! I killed a bunch of rando fictional characters and got paid well for it. I knew the only way to survive in a place like this was to become a main character myself."
— Gwen Poole
Advertisement:

You like Spider-Gwen, you love Deadpool, so what could be better than these two together! No, not a team up, but as the same person (except not really)!

Meet Gwendolyn Poole. She's from another universe, one where superheroes and space aliens exist only in the pages of comic books. A lifelong fan of comics, but especially Marvel's larger-than-life heroes, she one day finds herself displaced from her own New York City to downtown Manhattan on Earth-616, staring in awe as characters she grew up reading about rush past her to battle evil.

Starting life in a series of What If? variant covers with Gwen Stacy as various heroesnote (kicked off by the unexpected popularity of the aforementioned Spider-Gwen), Gwen dressed as Deadpool became so incredibly popular — especially among cosplayers — that she got a backup story in a Howard the Duck comic (later republished as Unbelievable Gwenpool #0). Then a Christmas special. And finally her own ongoing series in the All-New, All-Different Marvel lineup: The Unbelievable Gwenpool written by Christopher Hastings (The Adventures of Dr. McNinja), with art by the duo known as Gurihiru. This series served to give her a backstory which divorced her from her "Gwen Stacy Deadpool" origins and flesh her out into a proper character.

Alas, while the series had its dedicated fans, it ended on its twenty-fifth issue. The character herself went on to be part of the short-lived Marvel: A Fresh Start version of West Coast Avengers (2018 — 2019). This was then followed by a five-issue limited series called Gwenpool Strikes Back, wherein Gwen attempts to gain actual superpowers that can justify her continued existence in the Marvel universe. Spoiler alert, she succeeded, and has since made occasional appearances in other Marvel books.