Video Game / Way of the Samurai 4 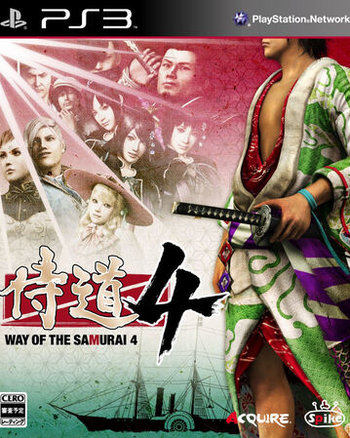 The fourth entry of the Way of the Samurai video game series. This game was first released in Japan for the PlayStation 3 on March 3, 2011. A US and European release followed on 21 August and 5 October 2012 respectively. This game is also notable for being the first in the series to receive a PC port, which was released in 2015.

The game takes place in the fictional port town of Amihama, just after the arrival of the Black Ships, signaling the start of the Meiji Restoration. Amihama currently goes trough a time of great strife, as three factions try to gain supremacy:

The game begins with a skirmish between these three factions, while a nameless Ronin just arrives by boat, and somehow gets involved in this fight. After the fighting ends, the Ronin has the ability to join one of the three major factions and help the chosen faction with their task, while the story unfolds, based on the choices the player makes. Or the Ronin can just muck about, without involving himself with any of the major factions.

Way of the Samurai 4 contains examples of: