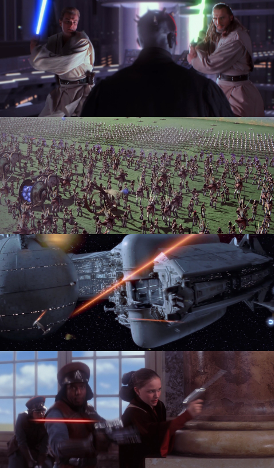 Many fight sequences in a work of media involve the simple dynamic of a single hero or team of heroes against an enemy. On certain some occasions, fights may be considerably more complex, consisting of multiple separate smaller conflicts combining to form a larger battle.

Often used during a final or climactic battle, these smaller conflicts may take place in entirely different locations, or may simply involve separate characters in individual conflicts. It may be used to add more tension, to break down a large battle into smaller, more manageable conflicts, or to allow characters to resolve a personal subplot at the same time as the main plot.

See also Big Badass Battle Sequence and Two Lines, No Waiting, both of which may incorporate this trope. Compare Sequential Boss and Multi-Stage Battle.