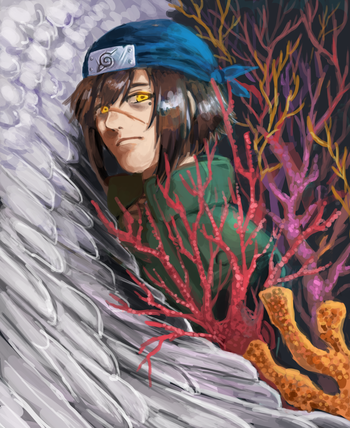 Keisuke Gekko, our story's heroine.
Ripples turn into waves and crash upon the shores of what is and what could be, and I was just someone else who got pulled under. I didn't realize that even a drowning person makes waves of their own.
— Fanfiction.net Summary
Advertisement:

Keisuke Gekko is reincarnated into the Naruto world during the Second Shinobi War and grows up during the events of the Third Shinobi War. Kei’s ability to change canon is limited by her place in the world and her own inability to act, but ripples spread out and her presence in the world is enough to influence things, even if she does not realize it.

is an ongoing self insert fanfiction inspired by Dreaming of Sunshine that manages to be something more than just a blind copy of the genre. Written by an author who is not afraid to harm Kei or let her fail, Catch Your Breath also manages to let the future of the shinobi world hang in question.

The story can also be found on Archive of Our Own here.

There are also several side-stories and crossovers, all written by the author. All works are simultaneously posted to Fanfiction Dot Net and Archive of Our Own.

One can find other tidbits, information and fanworks of Catch Your Breath on the official Tumblr blog for the story

Catch Your Breath contains examples of:

Tropes found in Catch Your Breath