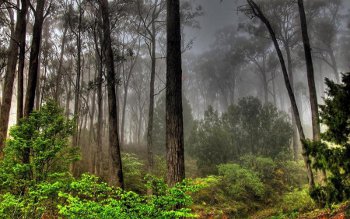 Pretty sure I shouldn't be going in here...
Advertisement:

To film, comic book, literature and TV show writers, the wilderness is untamed and unknowable where big adventures happen and few humans see. The big wilderness is mostly associated with the western coastline of America like Alaska, California, Oregon and Washington where miles of forest still exist in pristine beauty; the same applies to British Columbia, which makes up the Canadian portion of The Other Rainforest. It can also cover places like Germany's Black Forest, the many moors of England, like 90% of Russia, or any creepy, looming, or deep woodland in the world.

The Wild Wilderness is anything that pertains to big forests, mountains, empty meadows and other land untouched by the hand of man while it also has adventure, some spookiness/mysterious happenings, and/or events unseen by the rest of the world, or at least the general populace. For a good example, Erin takes a stroll in the Deep South woodlands to search for the source of a mysterious glow she sees every night out her window. She finds and ends up fighting off swamp pirates, saving an Artifact of Doom, fending off poisonous reptiles, and escaping back to the safety of home, all without anyone in her town noticing what's going on in those same woodlands.

In Real Life this is partly possible in only some of the listed locales as deep woodlands where no one can see what goes on; but in some works of fiction where there are modern or future settings it seems as if the world has had all of its woodlands magically transformed into untouched wilderness. If it takes place in a fantasy or alien world, it's Hand Waved to be uninhabited.

This is not often the case in reality; as anyone looking at Google Maps on satellite view can plainly see, population is sporadic and very well spread out. It's very difficult to get lost in the wilderness without running into a road or human settlement, outside of a few famously remote locales such as Alaska or Siberia. Whether this is a good or bad thing is up to interpretation as it can be quite disillusioning to watch the camera pan back on the DVD extras and realize there's a strip mine right behind the "lush wilderness" in your favorite adventure film.

May overlap with River of Insanity and may lead to The Greatest Story Never Told but is not related to Horrible Camping Trip in any way. Überwald is likely to be right on the doorstep, and may add some supernatural nastiness to the setting.

Compare Ghibli Hills, which is mostly wild but contains much more chance of random encounters with various inhabitants and their settlements; and Arcadia which is a "natural" rural area populated by shepherds or peasants. Not to be confused with the Enchanted Forest, which is when a forest is explicitly magical or otherworldly. When Trees Attack the protagonist, it probably falls under that trope.