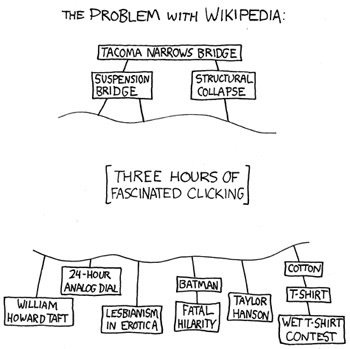 It's not the destination; it's the journey.
Liquid: I've been up all night doing research.
Ocelot: Research? On what?
Liquid: Well, it was supposed to be on the current geopolitics of modern nuclear weaponry.
Ocelot: This is a Wikipedia page about Mick Jagger.
Liquid: I got slightly sidetracked.
— The Last Days of FOXHOUND
Advertisement:

A trope we can all relate to, and one of the most prominent reasons behind why TV Tropes Will Ruin Your Life. You're probably doing it right now, or if you aren't you will be by the time you finish this article.

A Wiki Walk is a train of thought that has gone off the rails and is Riding into the Sunset. When going for a Wiki Walk you know where you begin, but no one knows where you'll end. Are you a Mad Scientist building an orbital death ray? Well, too bad, inspiration struck and now it's the world's biggest dancing dishwasher with a fully adjustable cup holder. You want to have a serious talk about the Middle East? Within ten minutes you'll be arguing whether Darth Vader could take Gandalf in a fight. Just want to check the Rule of Cool page? Before you know it you're adding examples to Bungling Inventor. You, my friend, have just had a Wiki Walk.

Despite the name, the phenomenon itself has existed since long before wikis — computers and hyperlinking simply made it faster and easier. For example, in the days of paper book encyclopedias, a person would get distracted and sidetracked by articles they paged past on their way to what they were actually looking for.

If in a mystery, it could easily cause a "Eureka!" Moment, or possibly a Bat Deduction depending on how out-of-nowhere it feels.

A common version of this trope is when a Wiki Walk is still in progress at the end of a scene, and then we catch the end of the conversation, which usually takes the form of a Noodle Incident, at the beginning of a later scene.

A Cloud Cuckoo Lander is particularly susceptible to these, though we mostly only hear the end result. This is most likely responsible for the stranger half of any Are You Pondering What I'm Pondering? moment.

If there is a database involved it will usually overlap with an Archive Binge, and is one of the reasons TV Tropes Will Ruin Your Life.

A Sub-Trope of this is the Halfway Plot Switch when the plot seems to do this.

Refers to how you could, in two or three links, end up at a trope seemingly unrelated to the page you started from. Definitely an example of Truth in Television. Often cannot be recreated, as anyone who has spotted an interesting trope en route, planned to come back to it, and then forgotten what it was, will attest. Doing it intentionally for fun is known as "playing Wiki Tag." Thankfully however there is the ever-helpful "open in new tab" function on your browser...

People have turned this into a game! It's called The Wiki Game, and the objective is to get from one article to a completely different article in the fewest number of clicks.

For an academic paper on the subject (although possibly not a peer-reviewed one — there is no title of an academic journal displayednote Although it was presented at the 2009 Workshop on Graph-based Methods for Natural Language Processing), go here.

Here on TV Tropes, tropers are asked to not leave links to pages on or off the wiki in place of contextualized examples because (among other reasons) tropers are incredibly prone to the Wiki Walk.