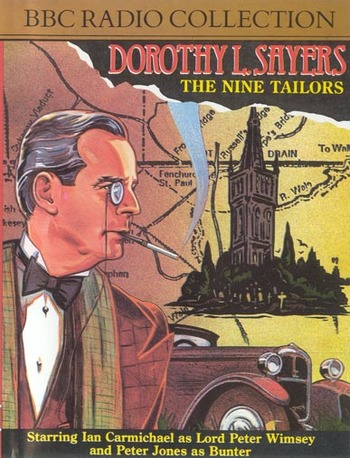 The hero of eleven books, a play, and a number of short stories created by Dorothy L. Sayers, with four sequels by Jill Paton Walsh following her death. The character and the stories he stars in are often considered among the best of the pre-World War II "Golden Age" mysteries, to the point where modern readers may see them as more like deconstructions of, parodies of, and occasionally paeans to British culture in the Interbellum that just happen to be about murder.

The youngest brother of the Duke of Denver, Lord Peter is an Amateur Sleuth with a keen observational faculty, an intense sense of justice and deeply ingrained trauma from his service in the trenches, all of which he hides behind a diffident and flippant personality. As he has no need for a job, he spends his time collecting rare books and acting as a police consultant in murder and grand larceny cases, frequently alongside Inspector Charles Parker of Scotland Yard and Mervyn Bunter, his loyal valet and old war comrade. Other recurring characters include Harriet Vane, Peter's love interest and a rare example of an Author Avatar done exceptionally well; Miss Climpson, an elderly spinster whom Peter sometimes sends on fact-finding missions; The Honourable Freddy Arbuthnot, financial genius; Peter's mother, the Dowager Duchess of Denver; and Peter's sister, Lady Mary, who rebels against her aristocratic family by involving herself in socialist politics.

The Wimsey stories take place between 1922 and 1936, and (a bit unusually for a mystery series) the characters age in real time: Lord Peter is thirty-two in Whose Body? and forty-six in Busman's Honeymoon.

While there is an film called The Silent Passenger made in Sayers's lifetime based on the character, she disliked it, a feeling seemingly reciprocated by the public and fandom, as it has not survived. In the 1970s, the BBC produced five miniseries starring Ian Carmichael as Lord Peter (Clouds of Witness, The Unpleasantness at the Bellona Club, Five Red Herrings, Murder Must Advertise, and The Nine Tailors). Carmichael also starred in the BBC's radio drama series from the '70s to the '80s which adapted nearly all the novels, save for Gaudy Night, which was finally adapted in 2005. The '80s saw Edward Petherbridge and Harriet Walter adapt the three main Harriet Vane novels, Strong Poison, Have His Carcase, and Gaudy Night. Carmichael brought both humor and depth to the role, while Petherbridge emphasized the melancholy and romantic sides of the sleuth.

In order of publication, the novels are:

There are, further, three collections of short stories:

Three further short stories, "Striding Folly," "The Haunted Policeman," and "Talboys", were collected posthumously in the anthology Striding Folly in 1971. All the short stories were subsequently anthologized in the compendium Lord Peter (1972). A collection of mock-historical studies by Sayers and various friends, notably including professional herald C.W. Scott-Giles, of the Wimsey family was printed privately and finally published in 1977 under Scott-Giles's name and the title, The Wimsey Family, with Scott-Giles's illustrationsnote  He would subsequently provide Sayers with the maps and diagrams for her translation of Dante's Commedia. One unfinished novel, Thrones, Dominations, was completed by novelist Jill Paton Walsh in 1998, who went on to write three sequels on her own: A Presumption of Death in 2002, The Attenbury Emeralds in 2010, and The Late Scholar in 2013. A series of "letters written by various members of the Wimsey family" and generally referred to as The Wimsey Papers appeared in the Spectator magazine between November 1939 and January 1940; these have not yet been anthologized, though various excerpts from them appear in A Presumption of Death.

The object in question is subsequently referred to by the narrator and the characters as "the missing object" until its identity is revealed as part of The Summation.

Tropes found in adaptations include: