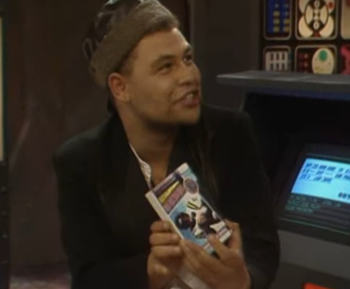 Apparently we're still using VHS tapes 3 million years in the future.
"With dated '60s references like these, we won't have much of a life in reruns!"
— Babs Bunny (imitating Rocket J. Squirrel), Tiny Toon Adventures

A work set in the Present Day at the time of its creation, but so full of the culture of the time it resembles a deliberate exaggeration of the era in a work made later.

To provide a concrete example, let's say you're changing channels and come upon a show involving two men sitting at a bar in some tropical country. One in a military-looking uniform with a hammer-and-sickle badge on the side is whispering in heavily accented English about his worries that the Berlin Wall may not last. The other man, sporting a glorious mullet, clips his absolutely gigantic cell phone to his belt before putting his hand on the other man's shoulder reassuringly.

When viewed by someone with even a shaky grasp of history, the historical period is blindingly obvious. Such a scene would have been made at the time with the focus entirely on Cold War politics, but the first thing the modern audience notices are the clunky cell phone and the mullet.

Narrow Parody is a subset of this trope. Zeerust is when a work's depiction of the future becomes dated, so all works with a far-future setting belong there, not here.

While just about every work becomes somewhat of a period piece after it becomes more than a decade old due to the characters referencing old trends, wearing out-of-style fashions and using out-of-date technology, this trope only really applies to works that wear their dates so blatantly that a viewer can identify the era or even year it was made in as soon as they begin to watch it. For example, while the 1990s sitcoms Friends and Frasier show their age in many respects, they don't wear The '90s so blatantly as to have this trope apply to them. On the flip side, a work based heavily around popular music — such as The Last Dragon or Dazzler's solo comic as a superpowered disco diva — can become painfully dated due to the rapidly changing nature of what's considered "hip".

Some jokes fall victim to this when a history lesson is essentially required to explain the joke to folks who weren't around at the time the joke was funny. While a joke about a president who is long remembered may have many years of life, a joke about a news story that isn't well-remembered 20 years later except by the people who were alive at the time or paying attention, or based on a then-popular but now long-gone ad campaign, wouldn't — inverting Don't Explain the Joke because the explanation is necessary. As the years pass, the number of people who get the joke or remember the reference shrinks until the joke becomes an artifact of the generation. Historians studying an era, however, read the joke and get a good laugh out of it still and these jokes can liven up an otherwise dullish history lesson, or amuse a group of people knowledgeable of the era, or catch your grandparent off guard: "I haven't heard that joke for years!" A "topical" work can fall victim to this if it has a premise that was Ripped from the Headlines — what was a major news story when the work was made can easily date it to its time period. A real life location may fall victim to a disaster that rapidly alters the landscape. A good example of this is any film with shots of New York City before 9/11.

Subtropes include Fashion Dissonance (when this is caused by clothing and hairstyles alone), Dewey Defeats Truman (which dates the work between the issue in question becoming relevant and it being resolved in real life) and Zeerust (when it's just the depiction of future technology that's outdated). Look for examples of Technology and Society Marching On, Aluminum Christmas Trees, and scenes that would resemble Mister Sandman Sequences if they occurred in an actual period piece. Compare with Two Decades Behind, which is when something inadvertently feels like a period piece despite having been made a good time after the period it seems to be based on, and We're Still Relevant, Dammit!, for when long-running series make blatant (and sometimes forced) references to modern culture in an attempt to seem up-to-date or to look more "hip", often resulting in one of these. Sometimes, especially when the viewer has spent too long on This Very Wiki, the very tropes in use may be recognisable of an era — such as the '90s Anti-Hero.

Note that a work being a product of its time doesn't necessarily mean it isn't relevant or entertaining to modern audiences, even notwithstanding the kitsch or nostalgia factor (as many of the examples below will demonstrate). If the work's severe datedness also makes it inaccessible to modern audiences, then you have Values Dissonance. However, this trope can overlap with Values Dissonance if an intellectual fashion was very short-lived. If a concept was new in its day but is now well-established and evolved beyond that, you're looking at "Seinfeld" Is Unfunny. If somehow the work manages to feel just as relevant today as it did then, if not more so, it's an example of Values Resonance, not this trope. Obviously, films and TV shows that were done in black-and-white, or non-high definition, as well as video games, will automatically be dated for technical reasons, but if we listed them all we'd be here all day. So it would be best to judge them more by content and plot. If the material's universal but the outfits are dated to the minute, that's Fashion Dissonance. Compare Anachronism Stew, which is one possible way to avert/subvert this. Dismissing a work simply on the basis of its "datedness" would be an Appeal to Novelty.

Important Sidenote: To avoid questionable examples, do not add a work less than 10 years old unless the situation is especially unusual. (Being completely overtaken by events by time of airing, and being called "instantly dated" by the press, have both qualified in the past.) For most works, it won't be particularly clear which ones really do bleed their production date out of every pore until roughly a decade has passed. Likewise, while works that are Older Than Radio, or even Older Than Television, technically qualify for this trope by default, they are so numerous that they will not be listed here. Therefore, this page uses the 1920s as its cutoff date.

Examples, organized by both decade and media:

The Falklands were invaded!

In order to cover for his live show, Krusty the Clown airs a rerun, hoping nobody will notice. Unfortunately, the episode chosen covered the Falklands War, which ended 12 years before the time of this airing.

The Falklands were invaded!

In order to cover for his live show, Krusty the Clown airs a rerun, hoping nobody will notice. Unfortunately, the episode chosen covered the Falklands War, which ended 12 years before the time of this airing.