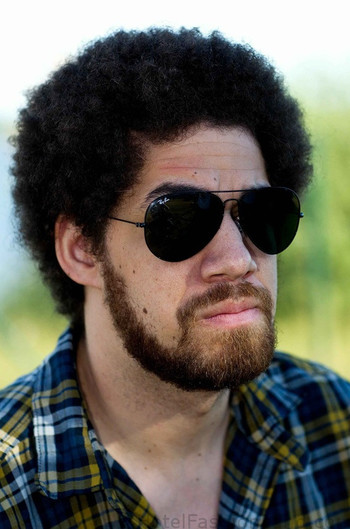 Brian Burton, better known by his stage name "Danger Mouse" (taken directly from the show of the same name), a record producer (for lack of a better job title) responsible for some of the most critically acclaimed albums of the past few years. His work seems to slide between hip-hop and alternative, but has included pop and electronic rock.
Advertisement:

Known primarily for his collaborations, he rarely produces works on his own. He first found fame in 2004 with a mash-up of Jay-Z's The Black Album with The Beatles' The White Album, creatively titled The Grey Album.

Danger Mouse's first big collaboration was with underground rapper MF Doom and Adult Swim to create The Mouse and the Mask, a rap album featuring songs explicitly about shows in the Adult Swim lineup (including voices from many of the shows' casts).

Burton's next big project was a team-up with Cee Lo Green, a group named Gnarls Barkley. The two produced their first album, St. Elsewhere, in 2006. It included the single "Crazy", which hit #1 in the UK charts and #2 on the Billboard Hot 100. The group followed this up with the 2008 album The Odd Couple.

Burton's other collaborations include:

Burton is also a notable producer (having won the Grammy for Best Producer in 2010), and has produced such albums as Gorillaz' big album Demon Days in 2005, Beck's album Modern Guilt in 2008, and The Black Keys Grammy award-winning album Brothers in 2010, U2's Songs of Innocence in 2014, and recently, the Red Hot Chili Peppers' The Getaway in 2016.