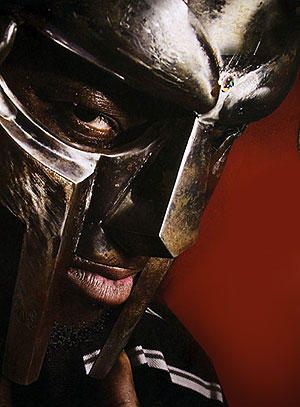 "Just remember all caps when you spell the man name."
— "All Caps", Madvillainy
Advertisement:

MF DOOM (also known as DOOM, Viktor Vaughn, King Geedorah, etc.) was a British-American rapper and producer, and a particularly troperiffic one at that.

DOOM, born Daniel Dumile (July 13, 1971 - October 31, 2020), had some success as a rapper in the early '90s in his group KMD under the name Zev Love X. However, the tragic loss of his brother in a car accident, along with the shelving of KMD's album Black Bastards in 1994 for its controversial cover art, caused him to retreat from the hip-hop world and sink into a deep depression. He eventually became homeless on the streets of New York; in interviews, he described himself in this period as "recovering from his wounds" and swearing revenge "against the industry that so badly deformed him."

If this sounds like a Super Villain origin story, well, the similarity didn't escape him, either.

When he recovered and returned to the world of hip-hop, he adopted the identity of MF DOOM, an Expy of the Fantastic Four villain Doctor Doom. DOOM consistently wore a now-iconic mask after he returned to performing, modeled after Maximus Decimus Meridius' mask from Gladiator; it is nearly impossible to find pictures of him from after 1998 or so in which he shows his face.

DOOM's raps often play with the ideas of the Super Hero and Super Villain, or use those tropes to deconstruct hip-hop culture. His lyrics are marked by a vast knowledge of popular culture and commonly allude to Science Fiction, Fantasy, Western Animation, and Comic Book characters. In addition to the Fantastic Four mythos from which his identity was borrowed (and from where he got a lot of hilarious samples of people complaining about "Doom"), he was fond of Star Trek, commonly comparing himself to Worf. The potential for Narm in this is tempered by DOOM's lyrical skill and playfulness as well as support from a range of excellent producers. DOOM maintains a good degree of popularity in both underground and mainstream hip-hop circles.

Throughout the 2000s and 2010s, MF DOOM's name would find further circulation among newer schools of hip-hop through his collaborative projects with producers and other rappers, each with one or two releases to their name. While his work with producer Madlib under the name Madvillain is far and away the most popular of these projects, seeing as the single work they made (Madvillainy) is regularly deemed one of the greatest rap albums of all time, he'd also tag-team with names including Danger Mouse (DANGERDOOM), Jneiro Jarel (JJ DOOM), Bishop Nehru (NehruvianDOOM) and Czarface.

On December 31st, 2020, Dumile's wife announced on social media that he had died on October 31st, 2020 at the age of 49; this was later confirmed by his representative. His cause of death is currently unknown.

He was a major supporter and friend of Adult Swim, having worked on several music products with them (namely the aforementioned DANGERDOOM project). In honor of him, the block hosted a marathon of the OFWGKTA series Loiter Squad, a show he helped work on as he was friends with the collective, on New Year's Day 2021.

MF DOOM made use of the tropes: