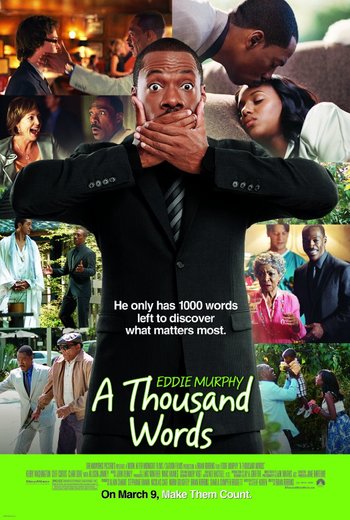 A Thousand Words is a 2012 (filmed in 2008) comedy-drama film starring Eddie Murphy and directed by Brian Robbins.

Loquacious literary agent Jack McCall (Murphy) uses his voice to strike book deals for his company all the while neglecting his wife Caroline (Kerry Washington) and baby son Tyler. Jack becomes intrigued with the work of Dr. Sinja (Cliff Curtis), whose teachings and philosophies have attracted immense crowds of people. During a discussion with Sinja at one of his many spiritual relaxation classes about striking a possible deal, Jack pricks his finger on a Bodhi tree. Upon returning home, he finds the same kind of tree has sprouted in his backyard, one with many, many leaves.

Jack calls Sinja over to his house to ask him why he put the tree here, but Sinja states that he had nothing to do with it. It isn't before long Sinja discovers with each word McCall speaks, a leaf drops off of the tree, Jack refuses to speak at all, as doing so will keep the tree, and him, alive. However, his work, marriage and friendships are all affected by his choice. Jack has his assitant Aaron Wiseberger (Clark Duke) keep track of how many leaves remain. Can Jack figure out an alternative method of survival? Or will he simply have to live the rest of his life to the fullest?

This movie provides the following examples: