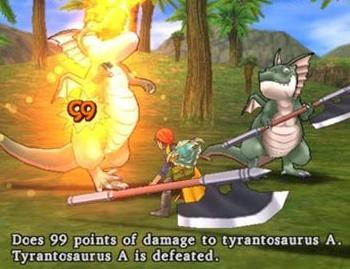 BAM! You just got Tyrannosaurus Wrecked!
Karashi: Had enough?
Khrima: You know very well that by the definition of hit points that I haven't yet had enough.
— Adventurers!
Advertisement:

This trope can be directly traced from the original Dungeons & Dragons, right down to the name. Since then, it's been used in genres as diverse as First-Person Shooter, Role-Playing Game, and Real-Time Strategy, and is nigh-universal for each, due to its usefulness for programmers (the alternative is One-Hit-Point Wonder where any damage is immediately fatal). On some occasions, the number itself is hidden and only a Life Meter is shown to represent damage. Survival Horror games favor foregoing even that, and simply displaying one of three to four colors in the status screen to indicate the player's well-being.

In First Person Shooters, this number is often exactly 100, and is taken to be a percentage of the player's normal uninjured health, with "mega health"-type items that cause your health to go above 100 often resulting in your health slowly ticking back down to 100. Ever since GoldenEye (1997), players and enemies often take multiples of damage based on where they are hit, but in the end, a bullet in the head is exactly the same as twelve in the foot, or what have you. This also means that eleven hits to the foot will not only not kill you, but often not even impair your movement - after all, it's Only a Flesh Wound. It's a good thing there are so many water fountains and Healing Potions spread about.

They're not always called "Hit Points," sometimes they are called "Health Points," or are collectively referred to as "Health Power." For spaceships and other vessels, they are often "Hull Points". If they have an on-screen abbreviation, it's almost always HP. If individual body parts have hitpoints, that's Sub System Damage. Sometimes entities have Multiple Life Bars, layered in combinations like Regenerating Shield, Static Health or for different types of attacks.

One common Role-Playing Game variation is to have two separate hit point values, one tracking fatigue and exhaustion while the other tracks wounds and injury. If the fatigue value goes to zero, the character may fall unconscious and/or start passing damage on to the wound total.

They're often displayed in a Life Meter, which is a subtrope. There's also Vague Hit Points for when a game has these, but the player doesn't know how many they, or the enemy, has.