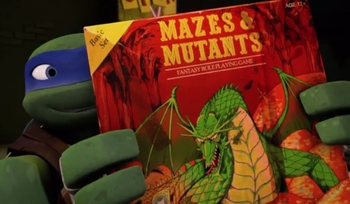 "Mazes and Mutants: The game about mazes, as played by mutants."
"Only a game designed by nerds would have 'charisma' as a fantasy power."
— Stanley Pines, Gravity Falls, "Dungeons, Dungeons, & More Dungeons"
Advertisement:

Like most media, Tabletop Games have a number of tropes common or even specific to them.