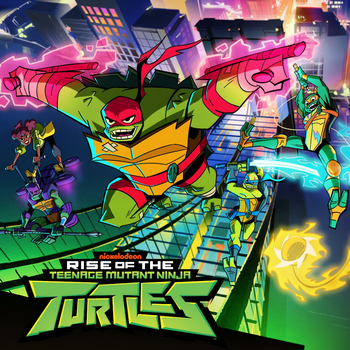 Clockwise from left to right: April O'Neil, Donatello, Raphael, Leonardo, Michelangelo.
Risin' up against evil, paint the city green
Raph is ready for a fight, Leo's makin' a scene
Mikey's got mad skills, Donnie rocks machines
With each other they discover their destiny and rise!
COWABUNGA!
— Theme Tune
Advertisement:

The fourth animated series featuring the Teenage Mutant Ninja Turtles and the second to air on Nickelodeon after the 2012 series. Premiering on September 17, 2018 with a preview on July 20, as the name suggests, it serves as something of a spiritual prequel to more "traditional" versions of the TMNT story, depicting the Turtles before they met their most famous villains or settled into their familiar dynamic; however, it shakes up the concept in other ways too, changing up the heroes' designs and iconic weapons and adding more fantastical elements.

This series is developed by Ant Ward, who originally produced the 2012 series, and Andy Suriano, character designer for The Powerpuff Girls and Samurai Jack. Veteran voice actor and Ninja Turtles mainstay Rob Paulsen is the voice director for the series.

The series was renewed for a second season on July 27, 2018, just a week after the preview. It ended with a four-part finale on August 7th, 2020 after two seasons and thirty-nine episodes. A Netflix movie premiered on August 5th, 2022, acting as the Grand Finale.

Tropes unique to this incarnation include:

"GET YOUR MIND RIGHT, SON!"

Raphael starts freaking out over his brothers going missing because Donatello forgot to remind him that they would be running late. Michaelangelo loudly tells Raph to stop panicking.

"GET YOUR MIND RIGHT, SON!"

Raphael starts freaking out over his brothers going missing because Donatello forgot to remind him that they would be running late. Michaelangelo loudly tells Raph to stop panicking.