Series / Ninja Turtles: The Next Mutation 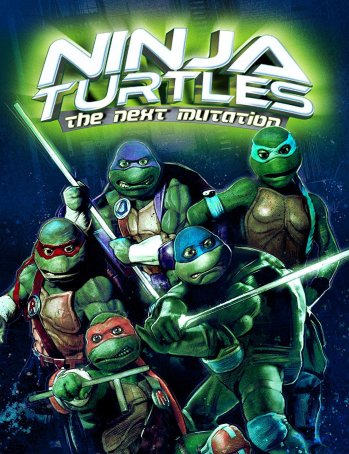 Don't speak of this to Peter Laird.

The first and so far only live-action TV series starring the Teenage Mutant Ninja Turtles, produced by Saban Entertainment. It only lasted a single season of 26 episodes, from September 12, 1997 to March 20, 1998. While supposedly taking place after the 1987 cartoon series, in reality, it follows the live-action trilogy by New Line Cinema. Confused yet?

The series begins with some familiarity: The four iconic anthropomorphic reptiles do battle with the Foot Clan and its leader, the Shredder. The turtles' master, Splinter still aids his sons with advice, and Leonardo and Raphael bicker amongst themselves. Suddenly, Splinter's spirit is rat-napped by an army of dragon warriors called the Rank. Led by their ill-tempered dictator, the Dragon Lord, the Rank ruled the world before they were banished to the Realm of Dreams by a mystic mirror. Splinter's friend, Chung I, a Shinobi master from China, was killed by the Rank, but not before telling his apprentice Mei Pieh Chi of her origins.

Turns out Mei Pieh Chi is really a pet turtle from Chinatown in New York who was covered in mutagen and became an anthropomorphic, 5 foot tall, talking turtle. Mei returns to New York, meets the other four turtles, uses her Shinobi magic to Mind Rape the Shredder right off the bat, effectively leaving the Foot without a leader, and rescues Splinter's spirit. Unfortunately, she accidentally helps the Rank escape, who take up the mantle as the new major threat to the turtles. Mei joins the four brothers and is given the nickname Venus de Milo.

The show ended up in Disney's hands when they bought Saban Entertainment, but Saban Brands later got the show back, along with the other Toei collaborations (Power Rangers, VR Troopers, Beetleborgs, and Masked Rider); meanwhile, the franchise itself is currently owned by Nickelodeon. As of 2011, the show is now available on Netflix. Shout!Factory released the series on DVD in 2012. Prior to that, the series had previously seen a Region 2 DVD release, although in a heavily edited form (and under the "Hero Turtles" banner, as the word "Ninja" was a no-no in the UKnote The rest of Europe has to follow on this, as it would be very costly to keep one name in a single region and a different one in the rest of Europeat the time). For some odd reason it got back on the airwaves in 2013 via The Hub until that network rebranded to Discovery Family.

Now With A Character Page Under Construction

No connection to the PC game Space Quest V: The Next Mutation.

Ninja Turtles: The Next Mutation provides examples of:

Example of:
Gretzky Has the Ball