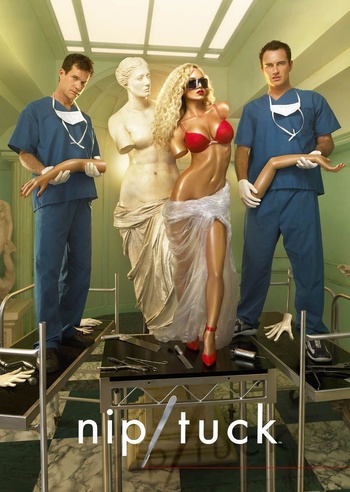 Nip/Tuck is an American Emmy- and Golden Globe-winning television Medical Drama series created by Ryan Murphy for FX Networks that aired from 2003 to 2010.

During its run, it had the distinction of being one of the most controversial shows on basic cable. Beauty and the disturbing implications of it are explored along with the drama in the characters' lives in cases that are often Ripped from the Headlines. The show goes out of its way to alternate between showing everything that's ugly about human life and everything that's hot about sex, and all of the characters seem more than happy to perpetuate that dynamic.

The show follows the lives of two plastic surgeons, Sean McNamara (Dylan Walsh) and Christian Troy (Julian McMahon) at the McNamara/Troy surgical practice. While the two are friends since college and part of a successful business, their lives are far from happy.

Sean's marriage to Julia (Joely Richardson), who dropped out of medical school after becoming pregnant (with Christian's child, due to a one-night stand) is strained at best. Their "oldest" son Matt (John Hensley) is a complete screw-up of epic proportions who does the most stupid things one can imagine. Meanwhile, Christian is a self-absorbed serial womanizer with a tragic past (his father raped his mother, who gave him up for adoption, where he was sexually abused by his foster father). He has multiple relationships over the course of the series, most notably being his relationship with ex-actress/porn star Kimber (Kelly Carlson), who Christian once literally traded to a rival plastic surgeon for his car. Rounding out the cast is Liz Cruz (Roma Maffia), the lesbian anesthesiologist who is the sarcastic foil to Christian and generally the voice of reason within the show.

Basically, every one of the core characters, and most of the supporting ones, are people you want to reach through the screen and slap at least once per episode. Or run away from.

This Show provides examples of: