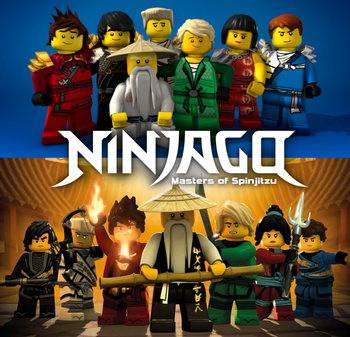 The Wu-Cru, pre- and post-redesigns.
♫ We just jump up, kick back, whip around, and spin!
And then we jump back, do it again!
Ninja! Go! Ninja! Go!
C'mon, c'mon, we're gonna do it again! ♫
— Ninjago's theme song "The Weekend Whip" by The Fold
Advertisement:

LEGO Ninjago, formerly titled Ninjago: Masters of Spinjitzu, is a franchise of LEGO products introduced in 2011 and is one of the brand's Long Runners at ten years strong. The premise is founded almost entirely on Rule of Cool: A group of Ninja with Elemental Powers fight to defend their homeland of Ninjago from ever-persistent, varying group of bad guys, from undead skeletons and serpentine armies to biker gang cults and rogue video game AIs. Aside from their powers and typical martial art trainings, the ninja utilize the sub-titular art of Spinjitzu, spinning at high velocity to channel elemental power tornados, to fight back against their enemies. When that's not enough, the ninja can fall back on both tamed and energy-form dragons, their wise tea-loving master Sensei Wu, and a plethora of allies and former enemies to aid the good fight against evil in its many forms.

After the tenth season "March of The Oni" ended, Ninjago would undergo a Studio Hop from WILFilm ApS to WildBrain from the eleventh season ("Secrets of the Forbidden Spinjitzu") onward, with the show dropping the "Masters of Spinjitzu" subtitle.

On the small screen, the series began with a made-for-TV movie, split into either two or four pilot episodes depending on where you live, was shown on Cartoon Network, making such an impact that a full TV series soon followed, currently totaling at roughly 15 seasons (though some are closer to mini-series length) and a feature-length special. A feature film adapatation, part of the The LEGO Movie franchise and titled The LEGO Ninjago Movie, was released in September 23, 2017, featuring Jackie Chan as Master Wu. As an Alternate Continuity to the show, accompanying tropes are kept to its page.

The series also has plenty of video game entries as well, starting with LEGO Battles: Ninjago on the Nintendo DS in its first year, along with Nindroids (adapting part of the third season) and Shadow of Ronin (a Canon Discontinuity adventure) for the Nintendo 3DS, and a multitude of miscellaneous games on mobile and web browser platforms. The series featured prominently in LEGO Dimensions as both toy packs and part of the main campaign, and The LEGO Ninjago Movie tie-in game released on PC and all consoles gets credit for featuring parts of the TV continuity not covered by the film.

WARNING: Late Arrival Spoilers like the true nature of Zane and the identity of the Green Ninja will no longer be spoiler-tagged. Browse at your own risk.

The First Spinjitzu Master splits the continent of Ninjago in two to avoid a potential loss to the Overlord's Stone Army.

The First Spinjitzu Master splits the continent of Ninjago in two to avoid a potential loss to the Overlord's Stone Army.