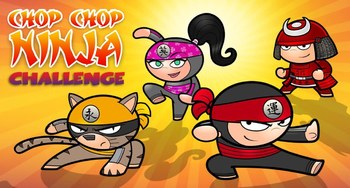 In 2012, the Canadian animation studio Sardine Productions (My Goldfish is Evil, ToonMarty) made a deal with Quebec-based video game developers Gamerizon Studio to produce an animated series based on Gamerizon's 2009 iOS platformer game Chop Chop Ninja. In 2014, the fruits of this agreement came to television in the form of Chop Chop Ninja Challenge.

Chop Chop Ninja Challenge is a series consisting of 90-second shorts that aired on Teletoon as interstitials between other shows beginning November 8, 2014. Each short starred one of four different ninjas — Iro, Jo, Neeko, and Tetsuo — and in every short, they were given a different task to complete by their sensei Master Enoki. The catch however is that the ninjas only have three tries or else they fail the challenge. And so, plenty of mistakes are made by the young ninjas-in-training, and plenty of Hilarity Ensues.

While only a total of 40 Chop Chop Ninja Challenge shorts were produced, they proved to be quite the hit, thanks to their slapstick humour and lack of dialogue giving them a broad audience appeal. As a result, Chop Chop Ninja Challenge was broadcasted in over 100 international markets. Impressed with the success of the shorts, Sardine Productions and Gamerizon continued to collaborate on adapting Chop Chop Ninja, this time moving on to a much bigger animated series that debuted in 2018 under the simple title of Chop Chop Ninja. This version of Chop Chop Ninja modified the artstyle of the shorts and games and expanded upon the kinds of plots the characters could engage in by adding plenty of new characters and increasing the length of each episode to 11 minutes, although Teletoon remained the series' home network.

Tropes for the 2018 animated series can be found here.