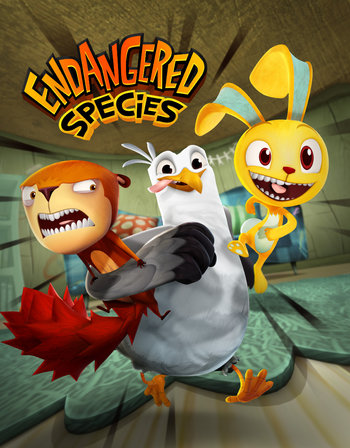 The trio's here.note From left to right: Merl, Gull, and Pickle
Advertisement:

Endangered Species is a Canadian All-CGI Cartoon by Nerd Corps Entertainment, previously known for having created Storm Hawks, League of Super Evil, and Slugterra, among many other series. It was Nerd Corps' first show to be released after the studio's acquisition by DHX Media in 2014 and their very last series before they were merged with DHX's main Vancouver animation studio (the former Studio B Productions) in 2016.

The cartoon follows the lives of three animal roommates who live in a stump. There's Pickle, the wild, playful rabbit who's always up for an adventure (voice of Tabitha St. Germain). There's Gull, the simple-minded but friendly seagull (voice of Lee Tockar). And finally, there's Merl, the high-strung chipmunk who acts as the Straight Man of the trio (voice of Samuel Vincent).

The cartoon was released on Teletoon on March 3rd, 2015. It ran for only a single season of 26 episodes and came to an end rather swiftly on June 2 of the same year. It is Nerd Corps' shortest-lived original production, beating previous record-holder Rated "A" for Awesome (which ran for the same number of seasons/episodes, but had more time to air all its episodes) and the first one to have never been shown in the United States.