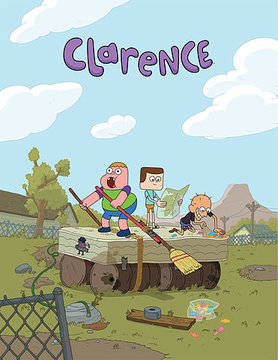 The kings of the world.note From left to right: Clarence, Jeff, and Sumo.
"It's worth it."
— Tagline
Advertisement:

The series marked an interesting change of pace for the network; in contrast to the more wild and surreal shows that makes up most of the network's creative output, from its contemporaries like Adventure Time to even older productions like Ed, Edd n Eddy, Clarence is a more grounded, down-to-Earth affair in the vein of shows like Hey Arnold! or Pepper Ann. The cartoon culls its humor from real-world situations akin to those that most children growing up in lower class/lower middle-class suburbia would experience: most of the surrealism is a result of the protagonist's overactive imagination and/or bizarre perspective on the world, though that isn't to say that some of the characters aren't just plain weird. This is still a Cartoon Network show, after all.

Page served as showrunner and the original voice of Clarence for most of the first season, before being replaced by storyboarder Stephen P. Neary following Page's Creator Breakdown and termination from the studio. The show ran for three seasons, from April 14, 2014 to June 24, 2018.

The show is streaming on HBO Max, with all the episodes present and accounted for, including the banned episodes "Neighborhood Grill" (banned in Latin America for showing a gay male couple) and "Straight Illin'" (banned in America for being excessively gross and showing dangerous behaviornote Clarence eating rotten deviled eggs) and the last season, which got little to no screentime on Cartoon Network's American channel because it wasn't Teen Titans Go! or The Amazing World of Gumball. From September 7 to October 1, 2020, the show aired on Boomerang.

The folders are worth it!