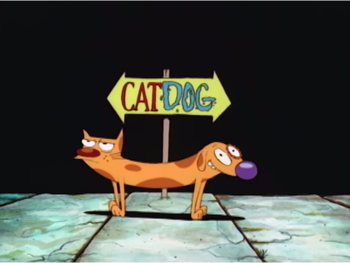 "Aw, cool! Twice the pet and none of the mess!"
A lunatic dog and a frustrated cat
Opposite this and opposite that
Internal struggle for two-in-one brothers
Scratchin' and bitin' and lovin' each other.
— The Expository Theme Tune
Advertisement:

CatDog is a Nicktoon created by illustrator and musician Peter Hannan. It first aired on Nickelodeon on April 4, 1998, and ran until June 15, 2005, for a total of 68 episodes.

The story revolves around Cat and Dog (together "CatDog"), conjoined twins who are a cat and a dog respectively. The conjoined twins have very different personalities. Cat is the brains of the outfit, sophisticated and obsessed with cleanliness. Dog, on the other hand, is much more laid back and naive than his brother, and enjoys going on adventures and eating; he's also rather easily led. Each episode follows Cat and Dog's daily adventures of living with each other and trying to avoid harassment from a gang of three dogs named the Greaser Dogs, corrupt businessman Rancid Rabbit, and their neighbor, a blue mouse named Winslow who lives in one of the walls of their home.

Notable for its cruel humor and bleak setting, with many stories involving bad things happening to characters who don't deserve it, making it one of the more polarizing Nicktoons. Nevertheless, it has a dedicated following of nostalgic fans.

The show reruns in the block NickRewind. The series was released on DVD by Shout! Factory, with the complete series released in 2014. As of The New '20s the title characters still occasionally appear in crossover works, namely video games such as Nickelodeon Kart Racers 2: Grand Prix and Nickelodeon All-Star Brawl.

Example of:
Sorry to Interrupt