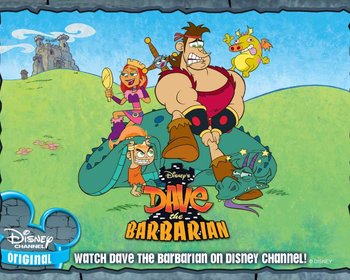 "Dave, Fang and Candy
Brave and bold, they're not
They ain't the greatest heroes
But they're the only ones we've got!"
— Theme Song

Dave the Barbarian (2004-2005) is a Disney animated series, an Affectionate Parody of the Heroic Fantasy and Sword & Sorcery genres.

The series takes place in The Middle Ages and centers on a powerful yet cowardly barbarian named Dave who lives in the fictitious land of Udrogoth along with his self-absorbed older sister Candy and feral younger sister Fang. His parents, Throktar and Glimia, are the King and Queen, but are away "fighting evil" across the world (though they sometimes communicate via a magic crystal ball), and have left Candy in charge of the kingdom. Together the three siblings, along with their wizard uncle Oswidge, their pet Faffy and Dave's talking sword Lula, are left to run and protect the kingdom.

There is a Narrator, referred to either as "the Narrator" or "the Storyteller", voiced by Jeff Bennett. He plays a big part in the show, as he controls what happens in the story. He is able to talk to the characters of the show, and vice versa. In fact, he was once captured by Arch-Enemy THE DARK LORD CHUCKLES, THE SILLY PIGGY!, and was forced to read narration where Dave loses to him.

The show was created and written by Doug Langdale of Earthworm Jim and The Weekenders fame. It premiered on Disney Channel on January 23, 2004; a year later, it began broadcasting on Toon Disney as well. In Latin America, the show was broadcasted on Jetix. The show only lasted one season due to Disney punting the show around their schedule. The reruns now mostly show on Early Morning shifts on the weekend.

Much like its predecessors The Flintstones and the short-lived The Roman Holidays, Dave the Barbarian juxtaposes the ancient and the modern. Candy, for example, shops in the local mall (the "Great Indoor Marketplace of Udragoth") and uses the crystal ball for online shopping sprees. Occasionally, the series even breaks the fourth wall with a character directly addressing the audience.

Critically acclaimed, but unfortunately it could not last since Disney just seemed to lose interest halfway into its run, and thus cancelled after one season.

Dave builds a homemade megaphone, using only some string, a squirrel...and a megaphone.

Dave builds a homemade megaphone, using only some string, a squirrel...and a megaphone.