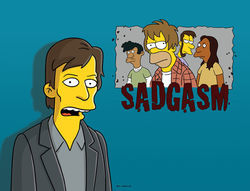 "That 90s Show" is the eleventh episode of the nineteenth season of The Simpsons. In this episode, Homer and Marge reminisce about their relationship in the 1990s (retconning their long-established 1970s background), when he was an aspiring musician and she went to college.

On a cold evening, the family shivers by the fireplace, as Homer is too cheap to have the heating fixed, thinking that global warming would be enough. While looking for something for the fire, Lisa finds a college diploma belonging to Marge, who had previously said she and Homer married and had Bart a couple of years after high school. Since she knows that Bart is 10 and her parents are almost 40, Lisa ponders about what happened in the decade in-between. Homer and Marge then proceed to tell their children about the experiences the two of them lived in the 1990s.

Having recently moved together, Marge is accepted into Springfield University while Homer, who is part of a light harmony quartet with Lenny, Carl and Officer Lou, takes a demeaning job at Abe's laser tag arcade to pay for her very expensive studies. At college, Marge becomes infatuated with her progressive professor Stefane August, who is a staunch feminist and tells her that Homer is a "townie" who would never really appreciate her. Finding them together, a heartbroken Homer decides to radically change the sound of his group into a new style of rock he calls "grunge" (for Guitar Rock Utilizing Nihilist Grunge Energy). Marge dislikes Homer's new music for its dourness and anger, and after he mocks Professor August, they decide to break up their relationship.

Upon moving in with Stefane, she begins to find his sensitivity rather overblown and sours on him. After he tells her that marriage is an outdated, oppressive and misogynistic institution, Marge (who expects to marry) realizes that the Professor was merely using her and breaks up with him. In the meantime, Homer's band Sadgasm becomes popular, but fame is little comfort for him after his breakup (even after having one of his songs covered by "Weird Al" Yankovic), and he composes "Margerine", a heartfelt song dedicated to Marge, who realizes that Homer still loves her. After finding out that Sadgasm has broken up as Homer has become a recluse and probably an heroin addict, she runs to aid him (turns out that Homer's supposed heroin habit was actually insulin because he got diabetes from drinking too many frappuccinos). After they make up, they both spend the night at the mini-golf course Bart was conceived in.