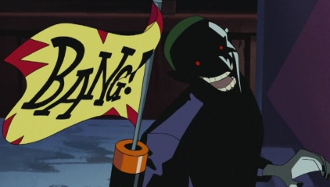 His act's a real killer.note This is right before he actually shoots someone with the flagpole.
"He's an absolutely awful human being. The strange thing about comedy is that if an awful character makes people laugh, people feel affectionate towards him. It's insane because if they had to sit next to him for five minutes at a dinner, they would absolutely not be able to cope with him. They would loathe him. But because he makes them laugh, they think, deep down, he's alright."
— John Cleese, on Basil Fawlty
Advertisement:

Of course, funny does not always equal weak. Praise be to the villain who can cause a chuckle from the audience, right before viciously thwarting the hero's best efforts. In fact, if done correctly, the very things that make a villain qualify can make them downright disturbing once they begin crossing the Moral Event Horizon. Villain laughing at faking someone out with a gun with a "BANG!" flag coming out? Funny. Same villain doing the exact same laugh when shooting them for real a few seconds later? Creepy. A truly well written one can manage to pull off both at once. See the trope picture for an excellent example of this subtype. Just because a character qualifies, it does not prevent them from being completely evil and there are many villains that manage to be both (again, see the page image). In these cases, what makes them funny also makes them very unsettling because of how much fun they have committing the most horrific acts possible.

Often overlaps with the Harmless Villain (Harmless Villains are inherently funny, but funny villains are not inherently harmless), Affably Evil, Faux Affably Evil (who are often funny), Love to Hate, the Ineffectual Sympathetic Villain and Magnificent Bastard. And with Large Ham (playing a villain seems to be very fun). It's also a prerequisite for the Bumbling Henchmen Duo, the Terrible Trio and the Quirky Miniboss Squad. Interestingly, this either subverts or complements Evil Has a Bad Sense of Humor, as does Too Funny to Be Evil, a closely related sister trope. Tends to be the sort who Crosses the Line Twice. See also Laugh with Me! and Beware the Silly Ones. A villain who is laughably evil need not have an Evil Laugh, though it can help. Alternatively, they may have an Un-Evil Laugh. A particularly Card-Carrying Villain with emphasis put on the comical aspects of their "Bad is Good and Good is Bad" morality can very easily turn into a Laughably Evil villain.