Launcher of a Thousand Ships 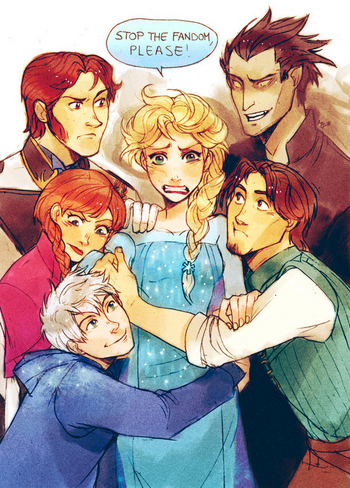 The fandom's not letting go.note The characters surrounding Elsa are Anna and Hans from Frozen, Flynn Rider from Tangled, and Jack Frost and Pitch Black from the non-Disney movie Rise of the Guardians.
Image

. Used with permission.
"I'm beginning to think he doesn't want me to ship him with everypony."
— Silver Quill [referring to Big MacIntosh]
Advertisement:

When shipping, some fans have One True Pairing that they cannot bear to break (or several of those), but some have just a Launcher Of A Thousand Ships character. It's the character that goes with everything, or, in this case, everyone. Actually, come to think of it, everything.

For example, if someone in the Harry Potter fandom says his Launcher is Snape, he will happily read Fanfics featuring the Snape/Harry ship as well as fanfics with Snape/Hermione, Snape/Lupin, Snape/Lily, or even exotic pairings such as Snape/Legolas or Snape/Megatron. Anything goes as long as the Launcher is included.

There is also a tendency for the entire fandom to consider a character a Launcher Of A Thousand Ships; notably, the Heroes fandom almost always refers to Peter Petrelli this way, given that he's paired up with damn near everybody in the show, including Nathan (his brother), Claire (his niecenote not helped by the fact that Milo Ventimiglia, who plays Peter, and Hayden Panettiere, who plays Claire, dated for a while, spurring a Terrance/Philip tribute video

) and even his own future self.

Also known as the "ship launcher", the "fandom bicycle" (everyone gets a ride), the "cargo container" (gets shipped to everyone), or the "little black dress" (looks good on anyone). The last shouldn't be confused with the Little Black Dress trope, which is Exactly What It Says on the Tin.

This usually has to do with Wish-Fulfillment: either the character is a lusted-after character and everyone likes to pair them with whoever reminds them of themselves, or the character is relatable and the fans see them as some sort of Audience Surrogate and they are paired up with different characters that the fans lust after so they can project themselves onto this character. If there are enough of these in one work, it becomes a case of Gotta Ship 'Em All.

Common traits tend to include lack of a canon love interest (or, if they have one, the show delays resolving their romance as long as possible or downplays it in general), interaction with enough of the cast to form some kind of rapport, or just general popularity meaning that most people have some crazy idea of where they should go. It also tends to snowball easily; if there's a lot of competing ships for this character, then suddenly more fringe pairings start to look a lot more reasonable.

The Trope Namer is Christopher Marlowe's version of the legend of Faust. In reference to Helen of Troy, Faust asks, "Is this the face that launched a thousand ships/And burnt the topless towers of Illium?" No relation to the Rachel Platten single "1,000 Ships".