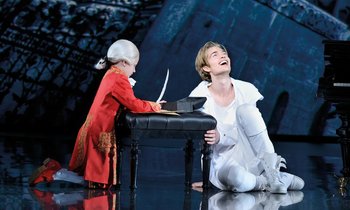 God gave the world the miracle of Mozart!
Advertisement:

Michael Kunze and Silvester Levay's second collaboration after Elisabeth, based on the life of Wolfgang Amadeus Mozart.

Like Amadeus, it's by no means accurate. It blends elements of reality and the Mozart mythos (much of which was perpetuated by his widow Constanze). There are three main conflicts: The first one is between Wolfgang and Leopold Mozart, the father loving the son wholeheartedly but unable to let him go, and the son wanting to please his father but unable to succeed, and ending up sabotaging their relationship forever. The second one is between Mozart and his patron Colloredo, the former not amused by having his personal and artistic freedom curtailed, refusing to bow down to nobility and power, the latter angry over the fact that a lowly tunesmith managed to scorn everything he had ever stood for and yet achieved perfection. The final one is between Mozart himself and Amadè, the porcelain child, a symbol of his genius, as they have an All Take and No Give relationship on the part of Amadè.

The musical made its world premiere at the Theater an der Wien in 1999, starring Yngve Gasoy-Romdal as Mozart, Thomas Borchert as Leopold Mozart, and Uwe Kröger as Colloredo. A DVD of the revival cast was recorded in Raimund Theater, Vienna, in 2015. It starred Oedo Kuipers as Mozart, Sophie Wilfert as Amadè (both pictured), Thomas Borchert reprising his role as Leopold Mozart, and Mark Seibert as Prince Colloredo. Both of the above productions have released cast recordings as well.