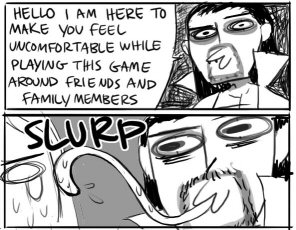 Vamp in a nutshell... or rather, a Big Shell.
Advertisement:

When a character pervertedly licks another character on any part of their body or on some other object. Sometimes indicates that a strong and unhealthy attraction or fetish towards something else is present, and it's pretty common for this trait to be given to Memetic Molester characters. Licking one's lips also counts as this.